An AI that distinguishes whether a poop 7,000 years ago is a 'human poop' or a 'dog poop' by machine learning is born 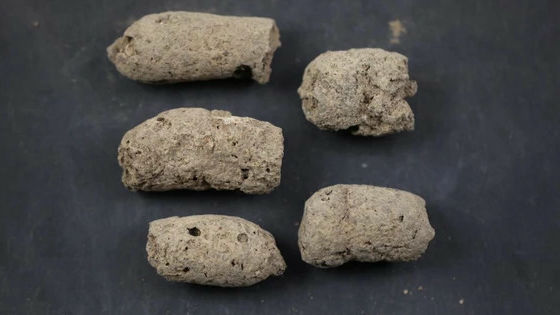 It is known that humans and dogs have been acting together for about 12,000 years, and fossils that are not known as 'human poop' or 'dog poop' may be found. AI ' CoproID ' that solves such poo discrimination problem by machine learning is newly introduced.

Does This 7,000-Year-Old Poop Belong to a Human or Dog? Machine Learning Has the Answer-VICE
https://www.vice.com/en_us/article/jge7j4/does-this-7000-year-old-poop-belong-to-a-human-or-dog-machine-learning-has-the-answer

Fecal stones , as the name implies, are fecal fossils that are excrement. Not only the DNA of excreters but also the DNA of foods and intestinal microbes are packed in fecal stones, so it is an excellent archeological material that you can understand the diet and health condition at the time by analyzing the contents.

However, it has been pointed out for some time that the excellent archeological material, feces stones, cannot be identified as 'human or dog.' The problem is that dogs often 'similar to stools' because they often had a diet similar to humans, in addition to dogs sometimes eating human stools and humans sometimes eating dog meat. By doing so, the main cause is to find 'feces containing human and dog DNA'.

In order to test whether 13 kinds of fecal stones excavated from 10 archaeological sites in Mexico, China, Europe, etc. can accurately detect non-fecal stones, the research team 7 sediments A discriminant test was performed on a total of 20 samples including The oldest fecal stone used in the test was about 7,200 years old.

Of the 6 fecal stones that were determined to be unknown, 3 did not have enough DNA to distinguish whether they were human or dog, and the remaining 3 fecal stones were human. There was a presumable intestinal flora , but at the same time the DNA of dogs was inexplicably high. The research team makes an inference about the latter, 'either human excrement that ate dog meat or excrement from dogs that have a completely different intestinal microbiota from modern dogs.'

Compared to dogs eating pet food at a fixed time every day, stray dogs getting food from garbage scavenging in the urban area and hunting in the wild may have completely different microorganisms in the intestine He noted that modern and ancient dogs may have completely different gut microbiota. 'In order to improve the accuracy of CoproID determination, advances in research on intestinal microflora in dogs are awaited,' he said.

The research team plans to input new data to CoproID in the future to improve the judgment accuracy.