A large amount of over 800 mammoth bones are discovered from `` a hole for capturing mammoths made 15,000 years ago '' Mammoths lived widely from Eurasia to Africa and the Americas from about 4 million years ago to around 10,000 years ago. I know that such mammoths were the target of hunting by ancient human beings, but there are over 800 mammoth bones from `` a hole for capturing mammoths made 15,000 years ago '' Discovered, archaeologists claim that it is a 'very important discovery'. 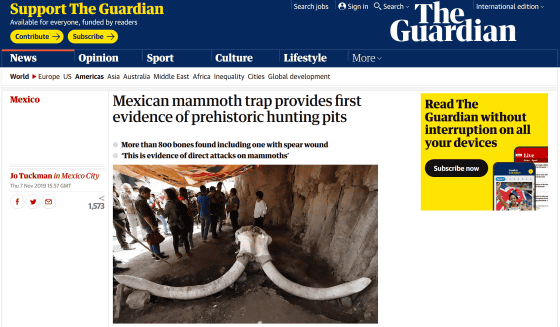 An excavation team at the National Institute of Anthropology and History of Mexico reported that in Turtepec , about 40 km north of Mexico City , discovered a 15,000-year-old hole made to capture mammoths.

In addition, from the two holes discovered, it seems that at least 824 bones of 14 mammoths were found. The breakdown of the bones found included 8 skulls, 5 jaw bones, 100 vertebrae (vertebral bones), and 179 ribs. Experts believe that the ancient people chased the mammoths in groups of 20 to 30 with torches, etc., and led them to the holes that were set up.

The excavation site where the mammoth bones and capture holes were found this time was discovered in January 2019 during the construction of a garbage dump. The holes found were 6 feet deep (about 1.7m) and 25 yards in diameter (about 22m), and there could be multiple holes nearby other than the two holes where mammoth bones were found In addition, camel and horse bones were also discovered at the same time. 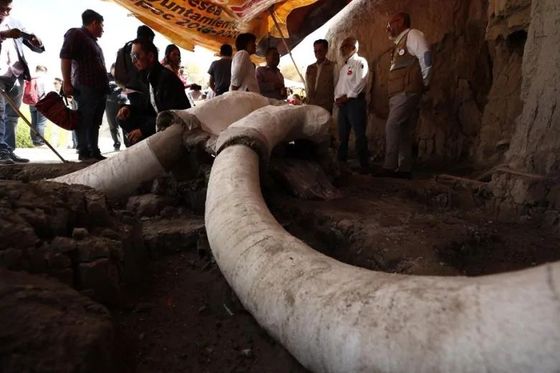 The excavation team leader, Luis Córdova Barradas, pointed out that at least one of the discovered mammoth skulls had scars that seemed to have been made by the spear, and argued that the discovery was important. The

In the bones found in the holes, traces of the use of mammoth ribs to strip meat from the bones were found, and the mammoth heads were turned upside down so that people could eat the mammoth tongue There is also a trace that was done. In addition, the found bones also included mammoth scapulae, but for some reason only the `` right scapula '' was found, and the `` left scapula '' was not found Córdova Barradas pointed out that it was a question. Córdova Barradas suggests that ancient people may have done some rituals against the mammoth.