Why is 'an attempt to make distilled liquor from pea' a countermeasure against climate change? gin is usually made from wheat, barley, rye, potato, and other distilled liquors, and scented with juniper berries ( Pine cones of European mice ). However, the newly developed gin by a Scottish research team uses pea as a raw material. The researchers said in a paper that the pea gin 'is effective in reducing carbon dioxide emissions and climate change.'

Just the tonic! Legume biorefining for alcohol has the potential to reduce Europe's protein deficit and mitigate climate change-ScienceDirect
https://www.sciencedirect.com/science/article/pii/S0160412019308773

Scientists made an environmentally friendly gin from peas.Yes, it will still get you drunk.
https://mashable.com/article/gin-garden-peas/ According to the research team, the amount of carbon dioxide emitted when making 700 ml of the famous gin

tankery is 1.26 kg. 'Traditional liquors, such as beer and whiskey, are made from grains that require large amounts of fertilizers, but the use of fertilizers has been a challenge for greenhouse gases,' said Graeme Walker, professor of fermentation science at Avertey University. To promote emissions and impact climate change. ' On the other hand, when producing 700ml Nadal, the carbon dioxide emission is -1.54kg. This means that the absorption of carbon dioxide in making Nadal exceeds the emission.

Pea and other legumes are known to coexist with fungi called rhizobia . The rhizobial bacteria that adhere to the roots, as if they were lumps, use nitrogen in the air to synthesize nitrogen compounds, which are nutrients for plants. Nitrogen fixation reduces the use of artificial fertilizers. That's why the researchers claim that Nadal has lower carbon footprint than regular gin.

In addition, the waste called 'pot ale' that accumulates at the bottom of the distillation pot of unrefined sake is made up of residual pea residue and yeast, so it can be used as a highly nutritious animal feed. In fact, at the Arubai Kee distillery, Nadal's pot ale is fed to cattle on an adjacent ranch. As a result, the amount of industrial waste can also be reduced, which can further reduce carbon dioxide emissions.

In addition, the reason for choosing pea instead of soybeans is that `` the spread of deforestation for soy production in Latin America '' is cited, and reducing the dependence on soybeans in Latin America will reduce the impact on climate change. It is expected that it can be suppressed. 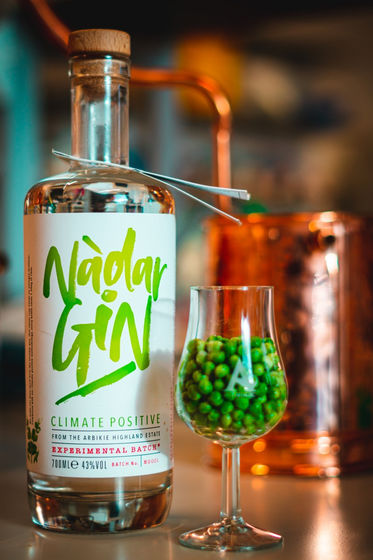 However, pea is a crop with severe crop failure , and unlike wheat, it cannot be continuously grown in the same field. For this reason, the research team points out that pea has a disadvantage that the acreage is larger than wheat.

Regarding the important gin taste, Mashable of overseas media actually tasted it and said, 'I could not feel the taste of pea. Although I had a little aftertaste, I enjoyed the taste of gin' I am.