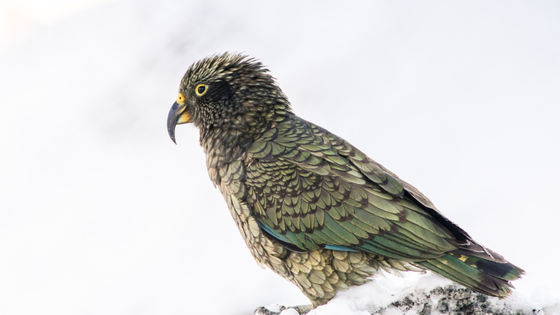 The endemic species of New Zealand,

Kea, has been shown by past experiments to have the ability to ' understand the concept of probability.' Although this parrot has high intelligence, it has been confirmed that it is newly 'supplementing the function of the missing beak with a tool'. 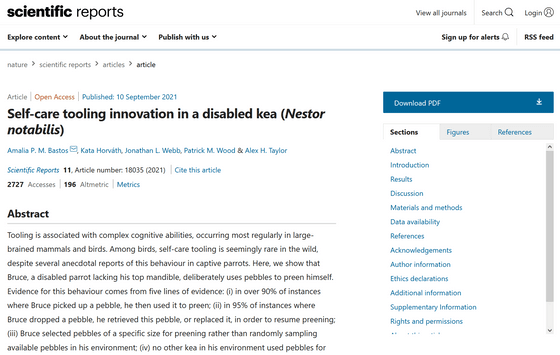 A Disabled Parrot in New Zealand Has Taught Himself to Use Tools For Self-Care
https://www.sciencealert.com/this-kea-with-only-half-a-beak-called-bruce-uses-tools-for-self-care

It was the Kea named 'Blues' that was confirmed to use the tools. The blues was originally a wildlife, but was protected by humans because it was found deficient in the upper beak and has since been bred in New Zealand's Willowbank Wildlife Reserve.

It has been confirmed that Bruce adapts to the environment and eats food, but due to the lack of upper beak, it may not be possible to groom the hair, which is essential for maintaining physical hygiene. I was worried. However, by Amalia Bastos and others who observed the blues for nine days, it was confirmed that the blues picked up the stones that had fallen on the ground with their lower beak and tongue, and groomed them well. You can see how Bruce is grooming her hair in the video below.


Mr. Bastos and his colleagues pointed out that Bruce's actions were 'intentionally picking up pebbles for hairing', 'if you dropped pebbles, you were picking them up', and 'choosing pebbles at random'. He cited four things: 'I chose a specific size,' and 'Aums other than the blues did not take such actions.' In short, stone-based hair-growth is a Bruce-specific behavior, and Bastos and colleagues point out that Bruce has the ability to learn and find the best stone for hair-growth. There have been reports of pet parrots using tools to brush their hair, but this is the first case of a parrot grown in the wild. 'Adapting to obstacles and using tools shows that Aum's intelligence is flexible,' said Bastos.