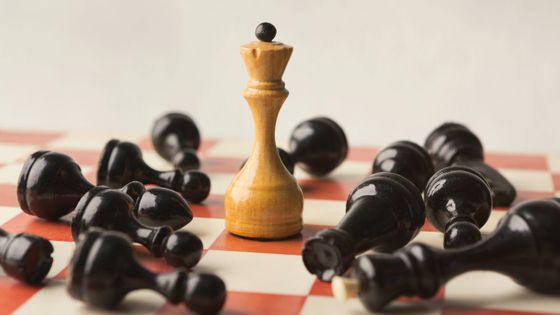 Stockfish is an open source chess engine that has been developed by many contributors since its release in 2008. The Stockfish management team has filed a lawsuit against ChessBase , a company that sells chess-related software, regarding the suspension of licenses for open source software.

The origin of the series of problems was the 99.9 euro (about 13,000 yen) chess engine ' Fat Fritz 2 ' released by ChessBase in February 2021. According to ChessBase, Fat Fritz 2 is a development of the chess engine 'Fat Fritz ' released in 2019, and uses a neural network architecture called NNUE devised by Japanese engineer Yu Nasu. NNUE is a neural network-based evaluation function that runs efficiently on the CPU without the need for a GPU, and was introduced in computer shogi in 2018. Since then, the movement to apply NNUE has progressed in the field of chess engines, and 'Stockfish 12' became the first chess engine to implement NNUE.

On February 15, five days after ChessBase posted an article introducing Fat Fritz 2, Stockfish published an article entitled 'Statement on Fat Fritz 2.' Among them, Stockfish, Fat Fritz 2 is a derivative of Stockfish, there are only a few lines of code changes (engine name, author list, slight parameters) and NNUE layer size, and there is no originality at all. Despite this, he accused Chess Base of writing it in a way that misleads him into thinking that he has developed a groundbreaking chess engine. 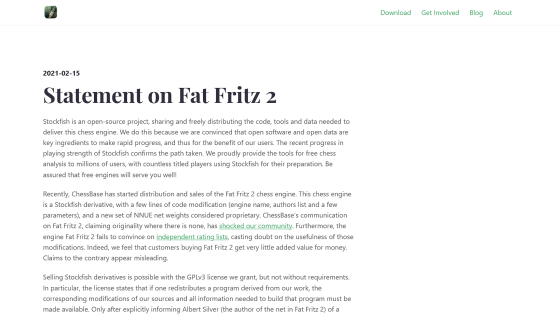 According to developer Albert Silver, Fat Fritz 2, like Stockfish, is trained and developed using NNUE, and although it's true that it runs in binaries within the open source Stockfish, It is different in that it evaluates based on its predecessor, Fat Fritz, and that the size of the neural network is also larger than Stockfish 12.

It has also been pointed out that Fat Fritz, the predecessor of Fat Fritz 2, is a copy of Leela Chess Zero , a chess engine based on an open source neural network. Fat Fritz was touted as 'a clone of AlphaZero designed in a secret project for nine months,' but in reality most are inherited from Leela Chess Zero. Gary Linscott, who directs the development of Leela Chess Zero, is also a contributor to Stockfish. 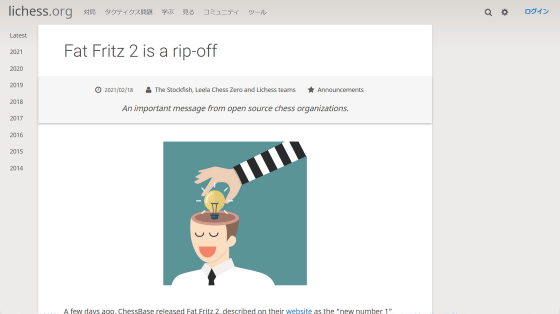 Stockfish is published under the GNU General Public License Version 3 (GPL), a free software license, which allows users to use, share, modify, and sell derivatives under the license. However, the Stockfish GPL license stipulates that when redistributing a program derived from Stockfish, all the information necessary to change the corresponding source code or build the program must be made available to other people. It seems that it has been done.

However, ChessBase, whose GPL license for Stockfish should have been suspended, still distributes Stockfish's copyrighted material as part of its product. Stockfish then explained that it had filed a proceeding to force ChessBase to enforce the consequences of the termination of the GPL license.

The Stockfish team said in a statement, 'This proceeding is widely supported by the people who maintain Stockfish and the team of developers. We have the evidence, financial means, and determination to successfully complete the proceedings. I believe there is. '