Intel's Patrick Gelsinger is CEO 2021 June 22, as a new business sector accelerated computing and to focus on 'Accelerated Computing Systems and Graphics Group (accelerated computing systems and graphics throughput)', software Announced the establishment of the Software and Advanced Technology Group to promote Intel's vision for. In addition to this, it was also revealed that the 'Data Platform Group' will be reorganized and divided into two business divisions.

Since the change of Intel CEO from Bob Swan to the incumbent Gelsinger CEO in February 2021, Gelsinger CEO has made a number of changes. In March, it announced a new strategy 'IDM2.0 ' aiming to expand foundry services, and announced a policy to focus not only on its own chips but also on chip manufacturing of partner companies, as well as chips for the automobile industry. It is also known that it is planning production. And on June 22, Gelsinger CEO announced that Intel's business unit will be reorganized and newly established. 'Since I rejoined Intel, I've been impressed with the depth of talent and tremendous innovation across the company, but moving faster to realize my ambitions,' Gelsinger said in a statement. Must be. ' Gelsinger CEO left Intel in 2009 and was the CEO of VMware, a cloud computing company from 2012 to 2021.

Intel will launch two new business units: Accelerated Computing Systems and Graphics Loop and Software and Advanced Technology Group. The former will focus on high performance computing and graphics, while the latter will drive Intel's unified vision for software.

Raja Koduri , Intel's vice president and GPU strategy executive, will be responsible for Accelerated Computing Systems and Graphics Loop. Greg Lavender , CTO and Senior Vice President of VMware, will be responsible for the Software and Advanced Technology Group. Lavender, who was with VMware at the same time as Gelsinger CEO, has been announced to be CTO and Senior Vice President at Intel as well.

Meanwhile, Navin Shanoy, who has been the head of the data platform group, was reported to be leaving Intel for 26 years on July 6th. 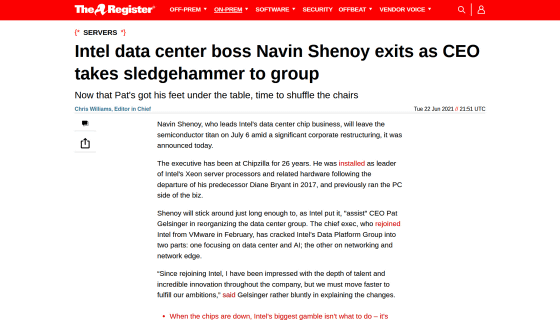 In a statement, Gelsinger said, 'By putting Sandra, Raja, Nick and Greg, who have decades of technology expertise, at the forefront of our most important work, we Sharpen the focus and practice of, accelerate innovation, and unleash a talented well throughout the company. '

Foreign media ZDNet also pointed out that the transformation was affected by Intel's face-to-face pressure from competitors AMD and NVIDIA.