A physicist and YouTuber bet 1 million yen on 'Can a car running in the wind run faster than the wind?' In the world of physics, it is a well-established theory that 'when a vehicle running in the wind travels in the same direction as the wind, it cannot run faster than the wind.' As for whether such a theory is really correct, Mr. Derek Muller, who holds a doctorate in physics from the popular science YouTuber, actually got on a windmill and is a physicist belonging to the

Kavli Institute for the Physics and Mathematics of the Universe. I offered Mr. Ksenko a bet of 10,000 dollars (about 1.1 million yen).

A Physicist and a YouTuber Made a $ 10,000 Bet Over the Laws of Physics
https://www.vice.com/en/article/pkb3pk/a-physicist-and-a-youtuber-made-a-dollar10000-bet-over-the-laws-of-physics

Mr. Muller publishes the state of the experiment and his opinion in the following video

Risking My Life To Settle A Physics Debate --YouTube


'Imagine a yacht floating in the water. When the speed of a yacht running parallel to the wind direction matches the wind speed, the yacht can't go any faster,' Muller said. 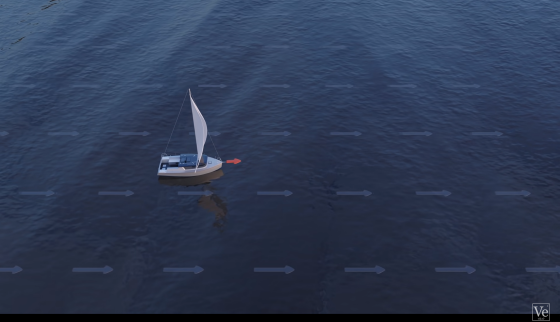 In competition sailing, it is possible to go faster than the wind speed, but this is a mechanism that generates lift by tilting the sail of the yacht at an angle of 45 degrees to the wind direction and sails upwind. The Blackbird, which was developed by engineer Rick Cavalaro in 2010 with the cooperation of Google and others, was measured by the North American Land Sailing Association at that time to 'run at about 2.8 times the wind speed', but was 'designed by the Physical Society of Japan'. There was a great deal of opposition because 'there are still doubts'. Therefore, Mr. Muller of YouTuber verified this theory again. The wind didn't blow as I expected, but I finally succeeded in the fourth experiment. 'Blackbird runs faster than the wind,' Muller claims. Müller explains that Blackbird is faster than wind speed, 'because the propellers have converted wind power into accelerating energy.'

When Muller contacted Kusenko, who had previously discussed physics about the experiment, he said, 'There is a problem with the Blackbird design.' 'Temporarily accelerated by a gust, and the law of inertia is more than wind speed. It may have reached a high speed. ' I have prepared 10 slides to deny Mr. Muller's experiment.

Here is a set of 10 slides that (1) explain what is seen in the video (2) point out the errors theoretical arguments, and (3) provide a complete solution to the problem. Https://t.co/cINbHs3Gg4

Our wager was witnessed by @neiltyson @BillNye @seanmcarroll

If I win, to what charitable cause should I donate the funds? Pic.twitter.com/IG95ZKqsLj

Mr. Muller says that it is necessary to create a model vehicle with the same operating principle as Blackbird in the future and experiment again in an appropriate environment. 'Thanks to the laws of physics, there is no risk of losing a bet, so I was able to accept a bet of any amount,' said Xenko.

'I think Kusenko's claim that'wind cars can't run faster than wind speed'is a real challenge to the basic laws of physics. If I'm right, physics is very unintuitive. It can be said that it was proved in such a way. ' He added, 'I think it's wonderful that intelligent people can speak different opinions from each other,' and they both have a common view that 'this discussion is educationally good.' is.