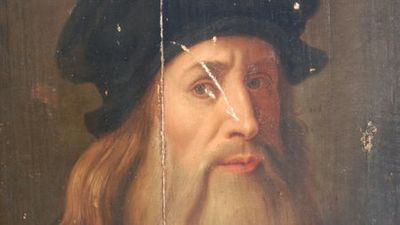 Leonardo da Vinci not only created the Mona Lisa by the talent of painting and is called the `` best painter of all time, '' but also in a wide range of fields such as music, architecture, mathematics, geometry, astronomy, geology, physics It is called “Universal Genius” with the achievements that overwhelm people of the same age. Nature has published an article focusing on Da Vinci's 'Liquid Research'.

Nature's announcement is about Leonardo da Vinci's manuscript by Martin Kemp, who is an emeritus professor of art history at Oxford University and is one of the world's leading figures for visualizing art and research left behind by Da Vinci. Based on the thesis, he focuses on Da Vinci's own 'scientific research' on the expression of liquids. 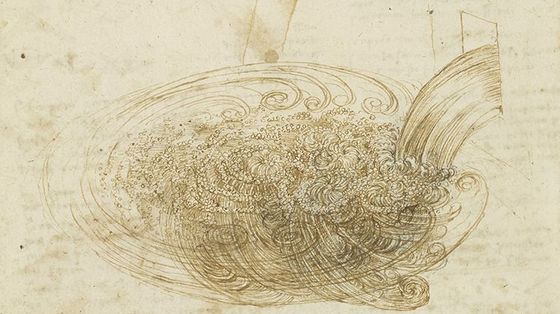 The Leonardo da Vinci manuscript is a note that Da Vinci wrote about his research and insights over his 40 years. Two-thirds of Da Vinci's manuscripts are believed to have been lost, but there are still about 5,000 pages still, and research on their contents is ongoing. This time Kemp studied a part of the Da Vinci manuscript called the ' Lester Manuscript '. The Leicester manuscript also includes some research on the light radiated from the sun to the earth and the moon, but most of it is an insight into hydrology that studies the flow and movement of water that is the precursor of hydrodynamics. And mainly experiments.

As well as the vastness of Da Vinci's research field, the hydraulic studies conducted by Da Vinci are various. Da Vinci makes detailed sketches about actual water flows, builds mathematical models derived from them, and actually conducts experiments on water flows. Below is a sketch of the water flow that occurs on the leg of Da Vinci's bridge. For the Leicester manuscript, buy a horizontal bracchia (unit of length of ancient Italy, 2 Bracchia is about 116 cm) and 0.5 bracchia (about 29 cm) with a flat bottom from a potter, and put a glass on it There is a memo for the equipment used for the experiment, which is to install and create a 'tank' for the experiment. Davinci researched water currents and vortices by pouring water into the finished tank and floating seeds of the grass family. 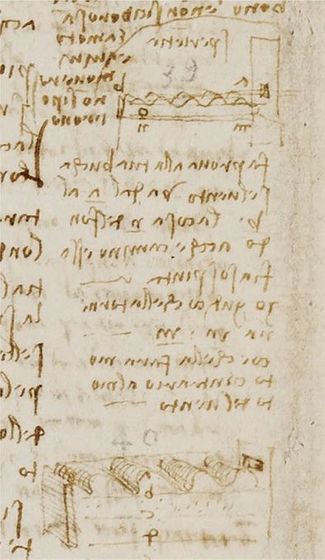 Da Vinci also wrote in the Leicester manuscript that 'the phenomenon that occurs at the bottom of the river can be proved by a simple experiment using sand' and created an experimental model that imitates the Mediterranean bay and the sea. As it progressed, the Mediterranean would become part of the Nile side. '

Da Vinci's research on water flow goes beyond water. According to the manuscript, Da Vinci was interested in blood flow in the heart, especially the movement of the

tricuspid valve . A tricuspid valve is a valve between the right atrium and right ventricle of the heart that closes and opens as the heart contracts and dilates. Da Vinci thought that “the vortex generated by the blood flow causes the tricuspid valve to open and close,” and actually planned a laboratory instrument to prove this. Below is an image of the plan. 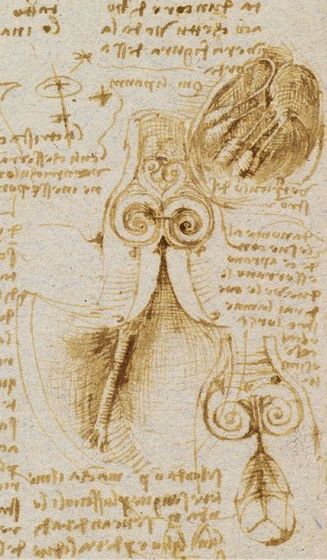 University of California fluid mechanic Mortesa Garib created a 3D model based on the experimental design left by Da Vinci, demonstrating the existence of a vortex that can close the tricuspid valve, and Da Vinci's insight was correct Shows. Da Vinci's research was original in the early Renaissance, and there are many things that anticipate the future. 2019 marks the 500th anniversary of Da Vinci's death, and Nature concludes with this article: “The research on Da Vinci is always amazing”.