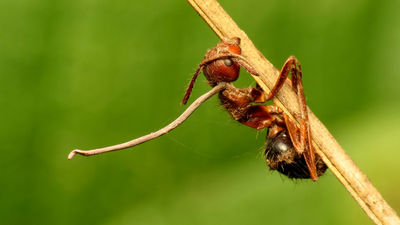 It is known that ants infested with fungi (molds) called Ophiocordyceps unilateralis grow meaninglessly and eventually spread spores from their heads and die while increasing infected people. You are A research paper at Penn State University has published a new paper on the parasitic mechanism of Taiwan Aritake, which makes ants look like zombies.

Taiwan Aritake is known for taking over the bodies of ants that inhabit tropical rain forests. The ants infested with Taiwan Aritake are slowly entangled in the mycelium with the whole body except for the head, and they become prolific without purpose, and eventually they bite their twigs with their jaws and die. After that, the sporangia (nodule) of Taiwan Aritake grows from the head of the ant, and the spores are scattered in the air and infected with other ant. The cycle from infection to spore release is about 4 to 14 days. 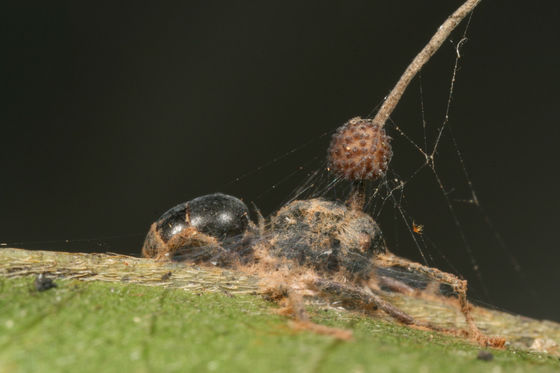 In addition, Professor Hughes discovered that cells of Taiwan Aritake, which are entangled in ants' bodies, form interconnected 3D networks, which transmit and receive nutrients while exchanging signals with each other. In this state, the brain is still an ant, but because the entire body is taken over by Taiwan Aritake, the body moves regardless of the will of the ant. In other words, ants infested with Taiwan Aritake will take over the body, but the brain remains intact without being parasitized. In a paper published in July 2019, a research team led by Professor Hughes reports the results of scanning ant muscle fibers infected with Taiwan Aritake under a scanning electron microscope.

Because Taiwan Aritake breeds in a hot and humid environment like Brazil, the research team reproduces the same environment in the laboratory. Spores collected from infected ants were infected with healthy ants kept in the laboratory. And when I observed the muscles of the jaws of dead ants biting into branches after infection, it was clear that mycelium of Taiwan Aritake penetrates muscle tissue, but the motor nerve and its joints are totally damaged. I understood that it was not.

The following image shows that the muscle fibers of the infected ant jaw (upper right) are enlarged due to parasitism while the muscle fibers of the uninfected ants jaw (upper left). Also, small lumps of grape like grapes found in the lower left and lower right were found on the surface of muscle fibers. According to the research team, this is one of the extracellular vesicles. We don't know if it's from ants 'cells or from cells in Taiwan's aritake, but the researchers say that the fungi may contain mediators to manipulate the ants' jaws. 'If the vesicles found are derived from ants' cells, the role may be a sort of immune response,' said Colleen Mangold, the author of the paper. The research may reveal the mechanisms by which the parasitized ants die from the branches, and the interaction between the host and the parasite.