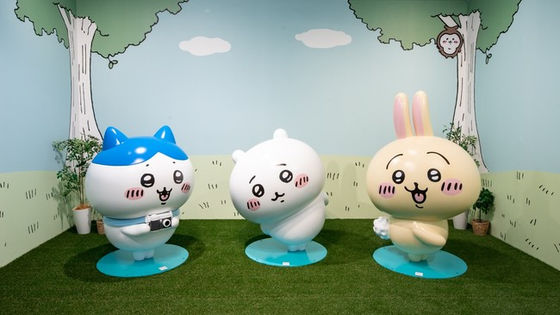 The first large-scale exhibition 'Chikawa no Mori ' of the popular character 'Chikawa' is being held at Ikebukuro PARCO until June 27, 2021 (Sun), after which a traveling exhibition will be held in 4 cities nationwide from July 2021. It will be held.

The exhibition period is from Saturday, July 3rd to Sunday, July 25th, 2021 at Sapporo PARCO, from Friday, July 30th to Monday, August 23rd, at Nagoya PARCO, and from Friday, September 10th to 26th. Sunday (Sun) is Hiroshima PARCO, October 1st (Friday) to 18th (Monday) is Osaka Shinsaibashi PARCO. Admission is 500 yen for adults, 400 yen for students, and free for elementary school students and younger.

Also, from June 10th (Thursday) to 27th (Sunday), an online exhibition will be held where you can watch the venue in 3D for free.

'Sole that spikes pop out when walking' is developed, which is inspired by Japanese 'Kirigami' --GIGAZINE

'Synthetic red blood cells' with higher performance than real blood are developed, can carry not only oxygen but also anti-cancer drugs --GIGAZINE

What is the cause of the mysterious sound that keeps ringing from the Golden Gate Bridge at a loud volume? --GIGAZINE

List of new animations starting in the summer of 2019 --GIGAZINE

4 Questions to Determine If You Have 'Burnout Syndrome'-GIGAZINE

◆ Neta (memo, etc.)
Everyone who is confused as to 'What is mystery ...' when that topical work 'Indecent housing complex' became the best-selling number one in Amazon's mystery category --Togetter

Imitation of a scientist from an enemy organization that appears in front of the main character while saying 'It's a preservation of seeds' pic.twitter.com/tDuvZdsrUR

A disturbing toilet if you look closely pic.twitter.com/yJ0zWMzDek

I was looking at the homepage of my alma mater a while ago, but the layout was completely illegal and it was really interesting pic.twitter.com/JyBTQWHSxM

One step forward to a light source for sterilization and disinfection that can be used daily! --Riso

Titanosaurus, a fossil of Australian dinosaurs, turns out to be a new species World's largest 5 photos International News: AFPBB News

Budget of about 4.4 billion yen for hospitality expenses for overseas VIPs of the Olympics: Asahi Shimbun Digital

[Video available] Defamation of foreigners with temporary release without status of residence Not stated in the White Paper on Human Rights Minister of Justice Interview: Tokyo Shimbun TOKYO Web

Bankruptcy increased by 50% in May, plus for the first time in 11 months

A woman who fell during pregnancy and was imprisoned for 'abortion' for 30 years, was released on parole after 9 years in prison. Central America 5 photos International News: AFPBB News

Herd of elephants on the move, resting in the forest China 4 photos International News: AFPBB News

Early consideration of the establishment of 'Children's Office' Child-rearing support package by the end of the year-Bone draft: Current affairs dot com

'Who can cancel the Tokyo Olympics?' Possible under the initiative of the Japanese government US newspaper reports: Tokyo Shimbun TOKYO Web

The number of deaths at homes and accommodations exceeds 120 nationwide, with 28 in Osaka, the highest number disclosed by the National Police Agency | Kansai News | News | Kansai Telecasting Corporation

I have nothing to do, I bought an apartment and it's a renovation! To the preview. When my daughter opens the closet in the floor plan, an unknown staircase ...
There was an original attic space that was 'DIYed' by the former residents without permission.
Awesome Chisato. Ghibli? pic.twitter.com/CxFCrKmGQh

When I opened the closet in the condominium preview, a staircase that was not in the floor plan appeared → There was a DIY beyond imagination 'The air conditioner and lighting were on' --Togetter

'Looking for a place to recognize yourself ...' A high school girl from Tokushima passed Stanford University 'Regional disparity' felt in adversity [ABEMA TIMES]

The moment the customer uttered excessive rants over the phone, he called the police and the complaint almost disappeared as soon as he made the case. 'A resolute attitude works.' --Togetter

My parents had many buildings, and when I became an adult, I got enough unearned income because I took over some of the buildings, and my parents said, 'Even if you work, you can bring it with tax, so don't work.' I have never lived and worked. I was so frustrated that I almost died when I heard the story of someone like

Water trouble caused by plumbing work. Those who have estimated 250,000 yen to 35,000 yen seemed to have referred to my tweets, so I have summarized the tweets related to water supply so far.
In summary, don't call the refrigerator magnet, call the government office and ask for a designated contractor. https://t.co/55AU3sDiO0 pic.twitter.com/giNVGKWYQ1

Cat falls too much pic.twitter.com/gmZfUecSmA

Corona is sick immediately after the cold party, but insists that 'I have to undergo an examination, I just have a cold' and no one is going to the hospital to cure it. Hell pic.twitter.com/nI9X2ygPJ3

Stop talking about Machida's transcendental miscellaneous stories on the Internet

The fin maker I've always been indebted to has finally developed a deep-sea mermaid that uses LEDs. This is really amazing pic.twitter.com/RuylBo3lr7

I wanted to convey the fun of CG and VFX (visual effects), so I made a video that shows the flow of virtual MV production using Blender in less than 1 minute!

The so-called 'composite' often involves synthesizing CG with a live-action film, but this puts the live-action film in the world of CG. # b3d #blender pic.twitter.com/2NrA24qPyr

There was an angry case and I sent this stamp thinking 'I don't want to reply but it's not good to ignore read ...' but it was quite appropriate as an expression of feelings pic.twitter.com/C3VlxH4jYG

To everyone who always supports me.

It is the same period of the 4th gen member,
A dragon that is very, very important to me
Kiryu Coco is graduating from Holo Live.

Please make sure that the 4th generation original song is in time
I'm making it in a hurry and desperately!

There will be a graduation concert on July 1st, so
Let's make lots of fun memories! pic.twitter.com/M15s91vk3t

Towa has a bad language
I'm sorry at such times.

Kiryu Coco, who has been working hard since her debut in the 4th grade, will be graduating.

This was the last decision Coco made, so
I hope I can support you to the end.

Please give me a lot of love. pic.twitter.com/19Zq7BgXy8

I want to keep smiling with my favorite Coco-chan pic.twitter.com/Jm1vOvKqbZ

I love the chairman who gives kindness and energy to everyone even though it is so painful pic.twitter.com/2p0DGw6c4r

Thank you # live over not a # Mikaji picture # Kanata over and pic.twitter.com/hERSLuycpR

Kiryukai is immortal!
'Re Not Done We Yet, Our Work Is Just Getting Started, Kiryu-Kai Is Forever! # Here here pic.twitter.com/5yiYMbtd7S

What I can do is draw a smiling chairman.
positive. Be positive. #Mikaji picture pic.twitter.com/6hphBSzL5W

The strongest dragon.
Thank you for everything

All plastic models roll out! The forefront of packaging models opened by 'Kamikata Mail'. | nippper A site that shares the fun of Mokei with everyone who holds nippers.

A boy shopping at a sporting goods store with a girl friend who is interested pic.twitter.com/S9FJ5tMpGY

Hana-chan and Jin-chan have a preciousness that I can't think of as a junior high school textbook pic.twitter.com/QEXJ9eiVi7

A story about a man and a woman who fell in love at first sight pic.twitter.com/YX6AVqGGAE

I really want this kind of sense pic.twitter.com/xJjImXSJ3S

I don't think you'll be really polite in this process! ?? pic.twitter.com/1YhMezxPh4

I want to cure my sister's female kid! # 46
'Don't erase my treasure' pic.twitter.com/HXsAMylMoL

I wanted my sister more than my sister ... pic.twitter.com/AozCBUo8XN

What are you? #Creative Yuri pic.twitter.com/M8vYmayLrx

I drew a manga to propose to the beautiful mom next door. Run (1/3) pic.twitter.com/lGXDsYdbPm


'Wing of Darkness' review, maybe it was a good work

What's really creepy is that no one says, 'I'm responsible for hosting the Olympics.' All the Japanese side said, 'I can't decide to cancel or postpone it,' and the IOC said, 'Because Japan will do it, we will only fully support the event.' The authority is given to.

[Sad news] Takashi Toritani, a slump in the interleague game 'You must have been familiar with the pitcher of Se ...': Nanjei Stadium @ Nan J Summary