Many people use SNS such as Facebook and Twitter to spread the content widely. Since only short sentences can be shared on SNS, the reaction will change greatly depending on the title attached to the content.

BuzzSumo , an SNS analysis tool, investigates the relationship between the number of reactions and titles on Facebook and Twitter, and explains how to give an 'ideal title' to get many reactions.

100m Posts Analyzed: What You Need To Write The Best Headlines | BuzzSumo.com
https://buzzsumo.com/resources/hundred-million-best-headlines-study/view/ 'We found that the ideal title length was 11 words and 65 characters, and the number of responsive titles is getting shorter year by year,' says BuzzSumo.

◆ Numbers increase the number of content reactions
The graph below shows the relationship between the number of responses to content surveyed by BuzzSumo and the 'numbers in the title.' If you look at the graph, you can see that the content with '10' in the title is the most responsive. In addition, the second and subsequent numbers are followed by single-digit numbers such as '5', '7', '3', and '4'. BuzzSumo said, 'The magic number that should be used for the title is' 10 '. Also, you can get a lot of reactions with single digit numbers. It's in the top seven most responsive content, 'he emphasizes the importance of including numbers in the title.

◆ Phrases that call for repercussions
BuzzSumo's research on Facebook's responsive phrases looks like this. Time-related phrases such as 'of the year', 'in X years', and 'for the first' are listed in order from the first place. On Twitter, on the other hand, phrases that are completely different from Facebook, such as 'the future of', 'we need to', and 'at least X', are ranked high. Lined up in. In the graph below, the title genres are listed as 'Ranking,' 'Newness,' 'Hyperbole,' 'Instructive,' 'Surprise,' 'Curiosity,' and 'Guidance.' It is classified into 8 types, '(Guidance)' and 'Story', and the number of headlines of each genre responded on Facebook (blue) and Twitter (purple) is compared. If you look at the graph, you'll see that educational titles are responsive on Facebook and curious titles are responsive on Twitter. 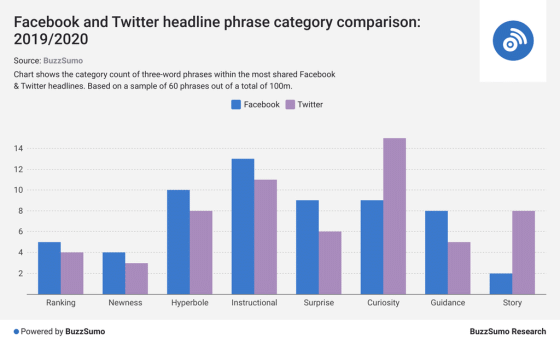 BuzzSumo focused on the fact that the number of reactions in the 'story' genre is increasing on Twitter, and 'Twitter users prefer content with titles such as' Story of XX ',' History of XX ', and' Rise of XX '. If you're dealing with this content, you should choose Twitter as your platform. '