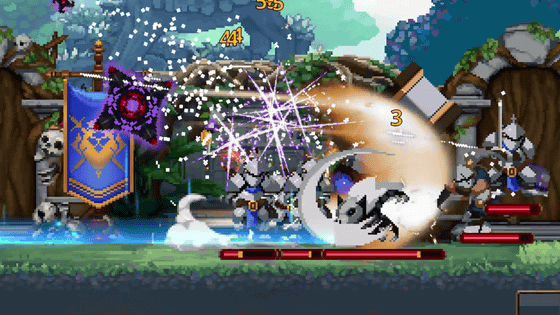 ' is a 2D roguelike action that combines 'roguelike ' that repeatedly challenges the dungeon by making full use of items that appear randomly in the 2D action, and has the element of 'replace the skull and transform the character'. Is a characteristic title. At the time of Early Access, it received high praise for receiving the 'Indie Game Award' of the 2020 Republic of Korea Game Awards and the 'Best Innovation Award' of the Unity Korea Awards, so what kind of game is it actually played? I tried to experience it.

The story begins when humans attack the Demon Castle. Even though the demon kingdom and the human kingdom had a peace treaty, they suddenly invaded with a brave man as the flag. The Demon Castle has become scorched earth. A young skeleton was overlooked while the Demon King and other major demons were captured and most of the soldiers were defeated. The story of this game is to become this small skeleton named 'Skeleton', defeat the hero and bring peace to the demon kingdom. The genre is called '

2D roguelike action' represented by 'Dead Cells ', and it is a game in which 2D maps are repeatedly advanced while returning to death while making good use of random elements. The actual game screen looks like this, and the stage is a side-scrolling type. Skull skills and HP are displayed on the lower left side. HP has an initial state of 100, but it can be extended with items etc., and the damage per time is about 10 or less, so you will not die in a few shots, but recovery means are limited. 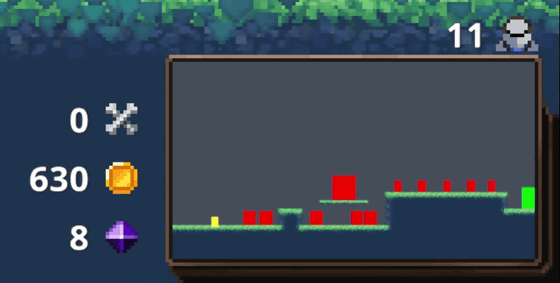 There are various enemies that come out, and not only human soldiers who have attacked but also monsters will appear. In addition to moving, jumping, normal attack, and dashing, Skull can handle two skills, 'throw a skull' and 'warp to the position of the thrown skull', so use these actions and skills to defeat monsters. I will continue.

The initial protagonist of the 2D roguelike action 'Skul: The Hero Slayer' can warp to the position where the skull was thrown-YouTube


All enemies only perform the simple action of 'coming to the skull and attacking', but there are many types. Some soldiers simply rush, archers who shoot arrows from a distance, wizards who magically shoot a ball of light, maids who throw plates, and various other enemies attack the skull. 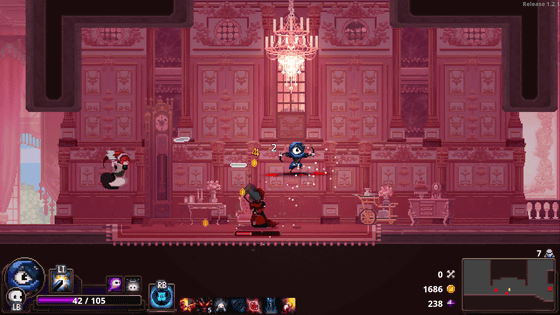 Archers shoot arrows when the skull stands at the same height, maids jump over the skull's head and then throw the plate, so there are not many enemy attack patterns and a considerable proportion Most of the attacks can be dealt with after seeing them, as the enemies will attack after making preliminary movements & non-large small fish enemies will interrupt their actions if hit. However, since a large number of enemies will appear at the same time, it is inevitable that they will be pushed by numbers. HP recovery methods are limited, so I don't want to be attacked as much as possible.

A large number of enemies are rushing in the 2D roguelike action 'Skul: The Hero Slayer'-YouTube


A wide variety of items will help you with such skulls. You can get items to strengthen the skull when you clear the stage or at the shops that appear along the way. Each item is not so strong, but you can own up to 9 items, 'Critical rate increases by 7%', 'Critical rate increases by 2% each time you attack an enemy', 'Attack speed increases by 55% when you defeat an enemy' Combinations of attack specialization such as 'Inflict magic damage to the surroundings when using skills' 'Generate fireballs when using skills' 'Reduce the cooldown of other skills by 2 seconds when using skills' Depending on the composition of the item, you can easily proceed with the capture. Some items have an active effect, and powerful items such as 'When activated, a dragon will fly and spit out a breath of fire' will also appear. 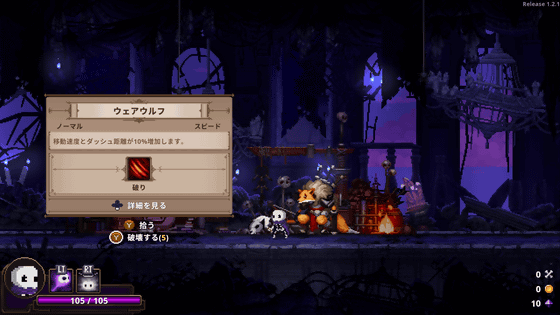 In the following movie, the skull is replaced from 'Werewolf' to 'Hunter'. Werewolf and hunter have different skills, and the normal attack is different from short range / long range, and the movement speed etc. also change, so it feels like replacing the equipment with another character rather than replacing it. ..


'Ghoul' has two types of pulling skills, 'hook throwing' and 'sucking' that pull all enemies in front of you, and instead of making your character huge and slowing down, the damage done per shot is large. Become. Since there is no time limit for transformation, you can basically proceed with the stage in the transformation state, but there are only two types of skulls that can be saved, and if you want to bring a third skull, the front skull You have to leave one of them.

The skull 'ghoul' of the 2D roguelike action 'Skul: The Hero Slayer' is a heavyweight character with powerful suction skills-YouTube


In addition to items, chefs who want to open a restaurant in a human country sell food that restores HP in villages along the way, and Dullahan who lost his head on the battlefield exchanges one head for free. I will. The story isn't the main game, but the characters that appear are all comical, and you'll want to talk to them every time you meet them. A boss appears at the end of the area. Since HP is abundant and multiple powerful attacks are released, you can judge which attack will come by looking at the motion of the boss, and hit everything you can while avoiding it well.


If you die, you will lose all the items and start over from the first stage, but with the 'magic stone' that will not be lost, you will strengthen the basic performance such as HP, basic attack power, magic attack power, critical rate etc. It is possible. You can move forward little by little as you play repeatedly. When I actually played it, I felt that it was important to 'determine the actions of the enemy.' Since each enemy only performs unique actions with preliminary movements, it is theoretically possible to 'see and deal with', but bosses who shoot attacks that fill the screen and one after another It is a different matter whether you can actually imagine the play against the boiling small fish enemies, traps stretched around the wall or floor, etc., and there are many cases that 'I knew it, but I could not avoid it'. The regrets peculiar to such action games and the roguelike element that different skulls and items appear each time you play are well combined, and there was a lot of addiction that 'only once more ...'. The Nintendo Switch version of 'Skul: The Hero Slayer' is scheduled to be released, but as of April 2021, only the PC version is available. The PC version can be purchased on Steam and the price is 2050 yen including tax. The Nintendo Switch version will be available in the summer of 2021.