What is a 'structural battery' that weighs virtually zero? 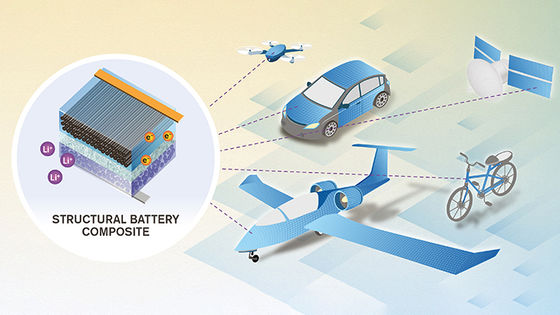 body is heavy , the weight of the battery becomes a bottleneck in improving the fuel economy of electric vehicles I am. Professor Leif Asp of Chalmers University of Technology in Sweden is working on the development of a 'Structural Battery ' that makes the load of the battery virtually zero by making a strong battery a part of the body. I will.

The idea of making the battery part of the car body has long been advocated. For example, in 2017, Italian carmakers Lamborghini and the Massachusetts Institute of Technology announced the Terzo Millenio, an electric vehicle concept model that incorporates a battery into the wheel to reduce weight and space. 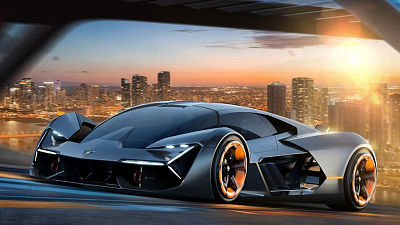 In order to put such a 'structural battery' into practical use, it is necessary to clear the issue of achieving both strength and performance as a battery. Therefore, the research team of Professor Asp and others focused on the fact that carbon fiber used for carbon fiber reinforced carbon composite materials has a function as a negative electrode for batteries. In collaboration with researchers at the Royal Institute of Technology in Sweden, we have developed a structural battery made of carbon fiber that can store electrical energy while maintaining high strength and rigidity.

The following is a structural battery prototyped by Professor Asp and others. This battery was manufactured by separating a carbon fiber electrode and a lithium iron phosphate electrode with a glass fiber cloth and impregnating it with an electrolytic solution. 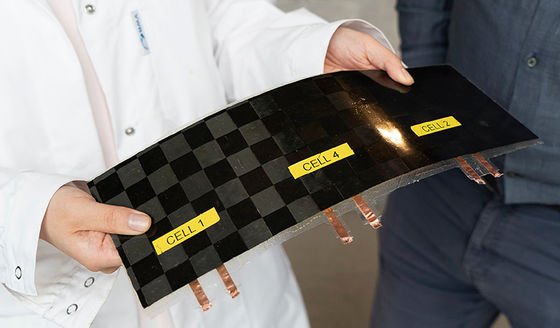 The energy density of this structural battery is 24

Wh / kg , and the capacity per weight is about 20% of the current lithium-ion battery. In this regard, the research team said, 'If this structural battery is used for the body, it is possible to significantly reduce the weight of the car body and the electric energy required to run an electric vehicle, and the rigidity is also general construction. It has 25 GPa (gigapascal ), which is comparable to the material, and the low energy density is rather advantageous in terms of safety. '

Professor Asp also said, 'Structural batteries made so far have only been superior in mechanical or electrical properties, that is, either strength or capacity, but by adopting carbon fiber, We have succeeded in designing a structural battery that is competitive in both. '