What is the secret of an electric vehicle battery that can be fully charged in 5 minutes? 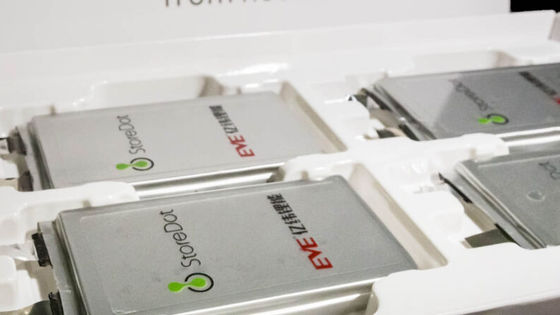 In addition to providing a large gap between the battery cells, the battery housing also has holes for circulating air between the cells, and the charger also has a fan for allowing air to flow through the battery. Has been done.

Existing battery technology can take the same idea as StoreDot, but it comes at a cost. In addition, lowering the battery cell density means lowering the energy density, so achieving the same battery capacity as the existing one has the disadvantage of increasing the size of the battery. ..

However, StoreDot's EV batteries use battery cell technology that allows for much higher charge densities that can offset the low battery cell density. Therefore, even though the density of battery cells is low, that is, the amount of cells is smaller than that of batteries of the same size, we have succeeded in achieving the same battery capacity. All lithium-ion batteries have electrodes made of materials that can store lithium ions to carry charge from one electrode to the other. Generally, graphite composed of multiple layers of graphene sheets is used for this electrode part, which holds lithium ions between the sheets. However, sulfur and silicon can store much more lithium ions than graphite, so it is said that more efficient batteries can be made.

Although sulfur has the risk of causing a chemical reaction inside the battery, lithium-sulfur batteries have already been developed that are four times more powerful than conventional lithium-ion batteries. Silicon does not have the same danger as sulfur, but it has the problem that it expands when a large amount of lithium is stored. Lithium batteries made of silicon are not manufactured because the expansion / contraction cycle that accompanies charging and heat dissipation can damage the small structure etched in silicon or the structure of the battery itself. reason. Therefore, it has been thought that a silicon-based lithium battery can be made if the volume change can be managed correctly. As a result of solving the thermal problem, StoreDot's EV batteries have also succeeded in avoiding some of the problems that silicon-based lithium-ion batteries may have. StoreDot's EV batteries have a very thin battery cell, which improves heat dissipation. Since we have succeeded in keeping the expansion coefficient of the battery cell lower than usual, it is possible to use silicon for the electrode part.

existing research that 'silicon is made into nanoparticles and the electrode is composed of layers of nanoparticles'. The nanoparticles are held to the electrodes by a flexible mesh, but where graphene was used in the study, StoreDot uses a flexible self-healing polymer. As a result, electric charges can move in and out between the silicon and lithium mixture, and it will function as a lithium-ion battery.

StoreDot announced a partnership with a Chinese manufacturer to outsource mass production of batteries in 2018. It is said that the production of the battery in the trial stage has already started, but it seems that it is not chemically the same although it is designed to match the performance of the final mass production version. As a result, Ars Technica notes that it's difficult to determine how many other issues remain on the StoreDot battery at the time of writing.

Ars Technica also said, 'Although we succeeded in identifying a paper similar to the principles StoreDot uses to develop lithium-ion batteries using silicon, there are many differences between the paper and StoreDot's technology. Also note that StoreDot batteries are technologies that rely on the development of materials science, such as self-healing polymers, and the original research was not intended to be used in batteries. 'I need it,' he said, adding that there are still many mysteries about the StoreDot battery.