Reported that the research team has found a way to overcome the 'unchargeable' drawback of lightweight, inexpensive, high-energy zinc-air batteries 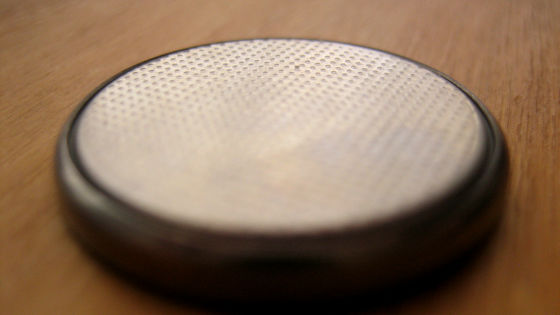 Most button-type batteries are ' zinc-air batteries ' that use oxygen in the air for the positive electrode and zinc for the negative electrode. The advantages of 'zinc-air batteries' are that the structure of the battery can be simplified by using air, it can be made more compact and lighter, and zinc is very cheap. It has the disadvantage that it is difficult to make it rechargeable. It is reported that an international research team has found a way to overcome this 'unable to charge' point by not using alkaline electrolytes.

A rechargeable zinc-air battery based on zinc peroxide chemistry | Science Zinc-air batteries are lighter, cheaper, and have higher energy than lithium batteries, which are often used as rechargeable secondary batteries, but they have the biggest disadvantage of not being suitable for charging. Yes, its use has been limited.

Research to solve this problem is ongoing, and in 2014 Hitachi Zosen announced that it had developed a cylindrical secondary battery for the 'zinc-air battery .' In 2017, Australian researchers have developed a new catalyst that can be used stably even with repeated charging and discharging of zinc-air batteries.

Succeeded in producing a catalyst that suppresses charge / discharge deterioration of 'Zinc-air battery', which has higher performance and is cheaper than lithium-ion battery, with ordinary metal --GIGAZINE 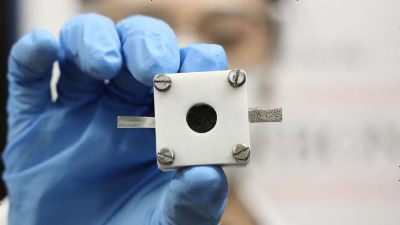 This time, researchers at the Institute of Physical Chemistry, Westfalen Wilhelm University and others have said that conventional zinc-air batteries used alkaline electrolytes to generate hydroxide ions from oxygen by 4-electron reduction. By using an alkaline electrolyte, we have shown that the battery works with reversible 2-electron zinc-oxygen / zinc peroxide.

The 'appropriate non-alkali electrolyte' is hydrophobic, and by removing water from the surface of the positive electrode, 4-electron reduction is prevented.

The new zinc-air battery created by this initiative eventually withstood a charge / discharge cycle of 1600 hours, although the negative electrode of zinc could no longer be used.

The biggest problem is the charging rate, and although there is still the problem that charging and discharging takes 20 hours in one cycle, it discharges at high speed because the manufacturing cost is one-fourth that of a battery using lithium carbonate. May be useful for applications that do not need to be.

In addition, it is considered that the method using this 'appropriate non-alkali electrolyte' may function even if a relatively inexpensive metal such as magnesium or aluminum is used for the negative electrode as well as zinc, and each has advantages. With a different balance of weaknesses and weaknesses, researchers suggest that there will be no competition for lithium supply.