Introducing a new type of battery that can be charged 10 times faster than a lithium-ion battery, with less risk of fire and less adverse effects on the environment Lithium-ion batteries are indispensable in modern life such as smartphones and electric vehicles. However, lithium-ion batteries have various problems such as the danger of ignition, the impact on the environment at the time of disposal, and the deterioration of performance at low temperatures. A research team at St. Petersburg University has reported that they have overcome these problems and developed a new battery that can be charged 10 times faster than before. 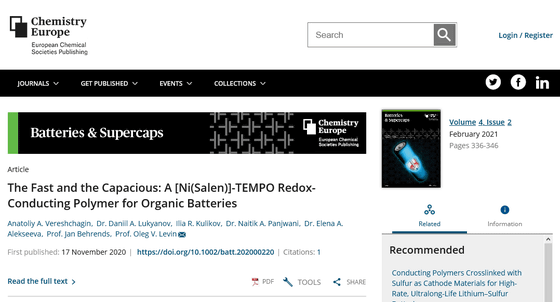 A new type of battery that can charge ten times faster than a lithium-ion battery created | EurekAlert! Science News 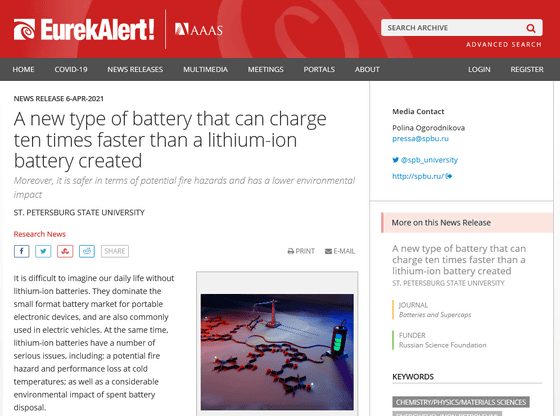 A team led by Professor Oleg Levin of St. Petersburg University has been researching redox-active nitroxyl-containing polymers. The characteristics of nitroxyl-containing polymers are high energy density and rapid redox reaction, resulting in high charge / discharge rate. On the other hand, there is a problem that the electrical conductivity is not sufficient and charge collection is hindered even if a highly conductive additive such as carbon is used.

To solve the problem, the research team has synthesized a nickel-salen complex-based polymer that can achieve high capacitance performance over a wide range of temperatures. In developing the polymer, it took one year to verify the concept of the new material, and it took three years to complete it.

A series of experiments have shown that batteries using this newly developed polymer can be charged about 10 times faster than conventional lithium-ion batteries. In addition, there are advantages such as 'no performance degradation even during low temperature operation', 'less risk of fire than cobalt-based batteries', and 'less metal content that adversely affects the environment'.

However, there is a problem that the capacity is 30% to 40% less, and the team is working on research to increase the capacity while maintaining the charge / discharge rate.