According to Canalys, Samsung, which operates Galaxy, shipped the most in the first quarter of 2021, with shipments of about 76.5 million units. Shipments were 59.6 million units, a 28% year-on-year growth. 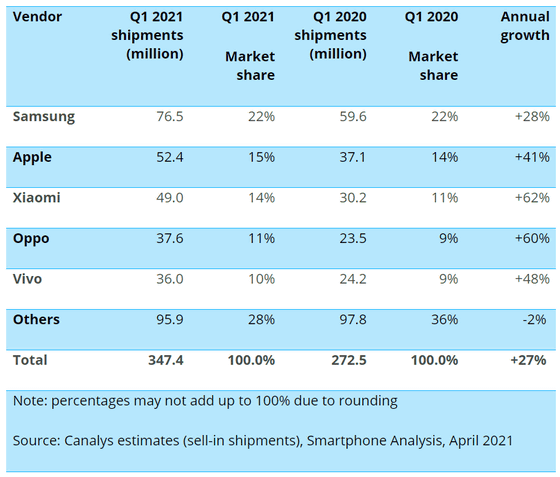 As of April 29, 2021, Samsung has announced its financial results for the first quarter of 2021. Samsung's revenue in the first quarter of 2021 was 65.39 trillion won (about 6.4 trillion yen), an increase of 6% from the same period of the previous year. In addition, operating income was 9.38 trillion won (about 920 billion yen). According to Samsung, sales of smartphones increased and demand for digital devices and TVs was strong, resulting in an increase in profits year-on-year. However, Samsung said that smartphone sales are expected to decline in the second quarter (April-June) due to insufficient supply due to the impact of semiconductor shortages.

Apple, which sells iPhones, has shipped 52.4 million units, with a 15% share. Shipments of the iPhone 12 mini, which was reported to be the worst-selling in the series, were lower than expected, but with rising demand for the iPhone 11, the iPhone series itself wasn't selling badly, Canalys said.

In addition, Apple also announced the results of the second quarter (January to March) of 2021, and iPhone sales during the same period increased by 65.5% from the same period of the previous year to 47.9 billion dollars (5.2 trillion yen) I'm recording. 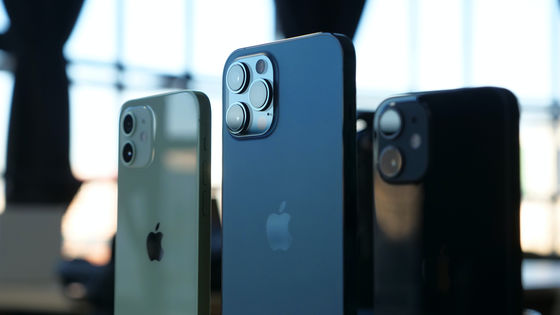 Xiaomi ranked third in shipments, recording the highest sales ever, with 49 million units up 62% year-on-year. In addition, Oppo has 37.6 million units and Vivo has 36 million units, and Chinese smartphone makers have made it into the top five shipments.

Meanwhile, Huawei, one of the largest smartphone makers in China, was removed from the US market in 2020, and shipments fell to 18.6 million units, ranking 7th.

In April 2021, LG Electronics, which had a large share of cheap smartphones in the Americas, announced that it would withdraw from the smartphone market. Canalys points out that the withdrawal of LG Electronics could increase shipments for manufacturers such as Motorola, Nokia and ZTE. Ben Stanton, Research Manager at Canalys, said, 'The epidemic of the new coronavirus is still a consideration, but it is no longer a major bottleneck. The supply of critical components such as chipsets has become a major concern. And it will hinder the shipment of smartphones in the coming quarters, so manufacturers need global brands to rethink their regional strategies. '