'Melting skilfish', where you can enjoy ultra-rare skilfish, has a rich yet addictive taste that melts fat. 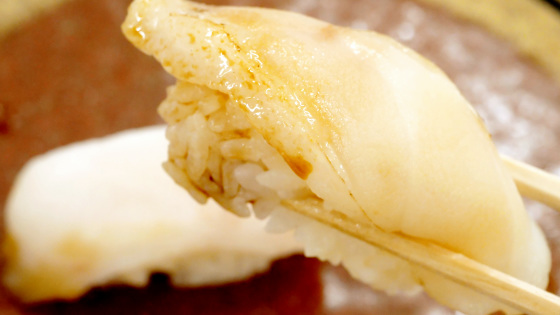 Sushiro, a conveyor belt sushi chain store, has been holding the 'Toro Toro Festival' from Wednesday, March 3, 2021. Among the menus named 'Toro' such as 'Otoro' and 'Negitoro', one of them is the deep-sea fish '

Skilfish ', which is said to have 40% of its body fat. There was a rare menu called ' Melting Skilfish ', so I tried to see what it tasted like.

Melting skilfish is a menu with one piece of 'raw' and one piece of 'burnt soy sauce' on one plate. This time, I bought 3 dishes to take home. 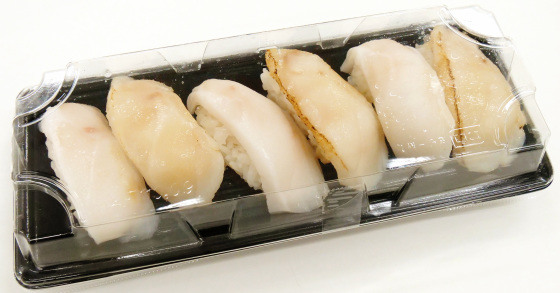 When comparing the material and the rice, the size is so different. First of all, I will try 'melting skilfish raw'. The moment you put the ingredients in the soy sauce, the fat slowly melts, and the soy sauce becomes covered with fat in no time. When you put it in your mouth, it has a sticky texture and a crunchy texture, and a large amount of rich fat makes you feel a little sweet. White fish tend to have a light taste, while skilfish have a rich and solid taste. There was no odor, and there was an opinion that 'the salmon has lost its flavor and habit.' 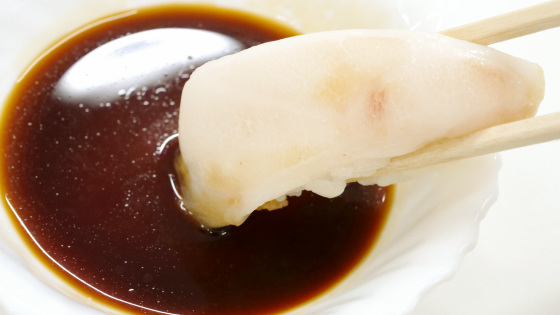 The following movie is a picture of the fat melted in soy sauce. Melting skilfish is a menu with one piece each of 'raw' and 'burnt soy sauce', and the price is 150 yen excluding tax. It will be on sale for a limited time until March 14, 2021 (Sun), and will end as soon as it is sold out, so if you are interested, you should check with the store in advance.