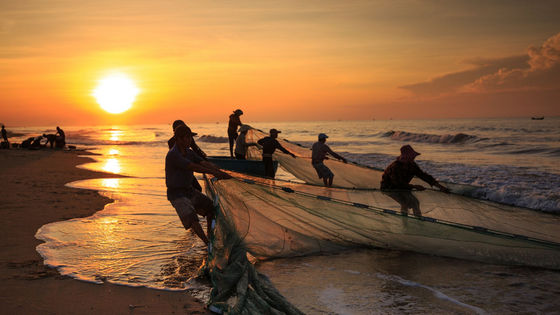 Since the advent of international organizations on the world economy, such as the Organization for Economic Co-operation and Development, it has often been suggested to low-income countries that 'economic growth is the way to improve the well-being of the people.' However, contrary to these recommendations, research teams at McGill University and the Autonomous University of Barcelona have found that 'the happiness of people in societies where money plays a minimal role has reached the highest level in the world.' It was announced.

Happiness really does come for free: People in societies where money plays a minimal role can have very high levels of happiness --ScienceDaily
https://www.sciencedaily.com/releases/2021/02/210208161922.htm

To measure the impact of the monetary system on well-being, Sara Minjaro and colleagues at the Autonomous University of Barcelona said that the Solomon Islands with a per capita gross national income (GNI) of $ 2020 and $ 1855. We conducted a survey on happiness in the two poorest countries, Bangladesh ( 194,600 yen).

During the several-month survey period, the research team conducted an interview survey on happiness among 678 people (average age 37 years old, 83.6% male) in fishing villages such as relatively wealthy urban areas and relatively poor remote islands. Was carried out. The gender ratio of the subjects is biased because 90% of Bangladesh are Muslims and it was culturally difficult to interview women.

As a result of this survey, it was found that the subjects living in poor fishing villages are more happy than those in rich urban areas, and in particular, the happiness of fishing villages is comparable to that of the Nordic countries, which are the regions with the highest happiness in the world. In response to the question 'when do you feel happy?', This difference in happiness is 'listening to music,' 'relaxing,' and 'going for a walk to the beach' in the fishing village area, which is mainly a self-sufficient life. It is thought that one of the reasons is that there are many answers about the activity, and in urban areas, there are many answers about socializing 'living with relatives'. In addition, previous studies have suggested that 'getting information about a country that is more developed than your own country through IT infrastructure affects happiness', but this survey shows such a sign. There was no such thing. 'This study shows that the key factors that support well-being may be independent of financial outcomes,' said research team professor Chris Barrington-Lee. 'A safe, comfortable and healthy community. If you can enjoy your life freely inside, you seem to be happy regardless of whether you are making money or not. '