When did the common sense that 'white wedding dresses are the standard for bridal gowns' came into being? In recent years, wedding dresses worn by brides at weddings have appeared in various colors such as pink, blue, and yellow, but white dresses are common. Maurice Sheny, a part-time lecturer at The Ohio State University and Columbus University, explains why wedding dresses have become so commonplace that they are white.

Why do brides wear white?

The roots of the custom of brides wearing wedding dresses go back to the Roman Republic about 2500 years ago. It was common for women at the time to get married in their early teens, and marriage was not allowed in Rome without both the bride and groom being Roman citizens or a special permit called a 'combium', not a love marriage but a family relationship. The engagement was based on the agreement.

The bride wore a white tunic, a heracles knot tightly wrapped around her waist, and an orange veil and shoes, waiting for the groom to arrive.

In addition, Republic to the Roman era, culture to find the meaning of 'purity' to the color of white has already been shared, it is punished by the goddess in the stove of the goddess Vesta served in the Vesta virgin protect the chastity 30 years I know I made a vow and always wore white clothes. However, after the fall of the Roman Empire, choosing white clothes for bridal gowns became obsolete. From the Middle Ages to the mid-19th century, brides often wore 'the best dress they had' or 'a dress that they could wear on another occasion.' According to Sheny, in a world where laundry is hand-washed without enough water, dirty white outfits have not been considered practical.

Meanwhile, it was Queen Victoria, who symbolized the British Empire of the 19th century, that caused a big trend in bridal gowns. When Queen Victoria married Prince Albert of Saxony, Germany in 1840, she broke the tradition that 'the king wears a robe worn at the wedding ceremony' and put on a silk wedding dress and veil decorated with white lace. I wore it.

Below is a picture of Queen Victoria at the coronation. Victoria also seems to have worn at the wedding. 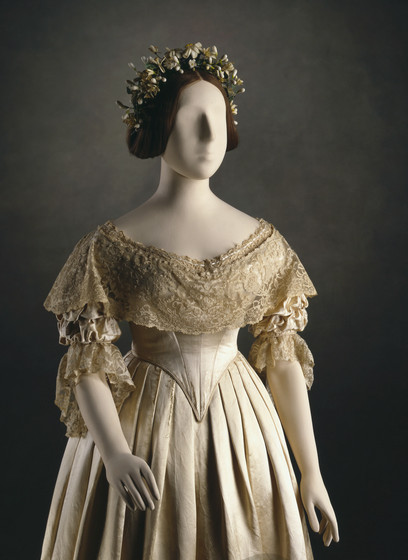 The dresses worn by Queen Victoria were designed to make women look younger and more attractive, which has led to a huge boom across Europe, with many women wanting to wear similar dresses for their wedding. During the Industrial Revolution of the mid-19th century, this Queen Victoria white wedding dress was 'wealth and fame' because it was only possible for the wealthy to marry in a 'clean and elegant place' free of mud and dirt. '.

In addition, this Queen Victoria style white wedding dress was a slightly yellowish

ivory to enhance the whiteness of the face. Therefore, in the 19th century, the bright, pure white wedding dresses found in modern times were not popular at all.

The boom in pure white wedding dresses began in the United States during World War II. The baby boom has arrived when soldiers returning from the battlefield get married and have children. As the number of weddings has increased significantly, the design of wedding dresses has changed significantly. Laws were also enacted to regulate the use of cloth during the war to avoid shortages, but lobbying in the bridal industry also had a major impact on the exemption of wedding dresses, Sheny said. I'm analyzing. After that, patterns and sizes were prepared in advance, and customizable wedding dresses could be ordered at a reasonable price, and a princess-style pure white wedding dress with plenty of lace and frills appeared. The picture 'Blessed with a bride dressed in a luxuriously designed wedding dress in front of many invited guests' became a symbol of the American dream. In addition, it is said that since World War II, white wedding dresses have come to be described with the image of 'chastity' and 'dedication to her husband.'