Introducing the new ' Machi Koro ' card game from Japan, which was nominated as the final candidate for the 2015 German Annual Game Awards and the Cannes Game Festival 2015 and also won the German Ala Carte Card Game Award 2015. doing. Five editorial staff members played this game, which allows you to create everything from familiar things such as 'flower fields' and 'sushi restaurants' to 'shrines' and 'rocket bases.'

The package of 'Machi Koro Dori' looks like this. A mountain like Mt. Fuji is drawn, and the letter 'R' in the title logo is a characteristic design that looks like a dice. The number of players is 2 to 5, the target age is 10 years old and over, and the standard playing time is about 45 minutes. Inside the box were rulebooks, cards, coins and dice. There are 111 cards in total, and from the left of the image, there are roughly three types: 'landmarks', 'facilities', and 'reference cards'. There are a total of 20 types of 'landmark cards' with large facilities such as 'TV stations' and 'iron factories' drawn on them. In Machi Koro-dori, the person who wins these three types of landmark cards first wins. There are some super-powerful cards that say, 'Win the game the moment you win,' but it's also difficult to win because of the power. There are a total of 20 types and 86 'facility cards' with 'convenience stores' and 'trade centers' drawn on them. On the back side, there are pictures and numbers of the dice required to advance the game. The reference card is a printed version of the game procedure and will be dealt to each person. On the back side, the expected value when rolling the dice and the facility card corresponding to the appearance are written in detail, and you can build a strategy in advance by looking at this. 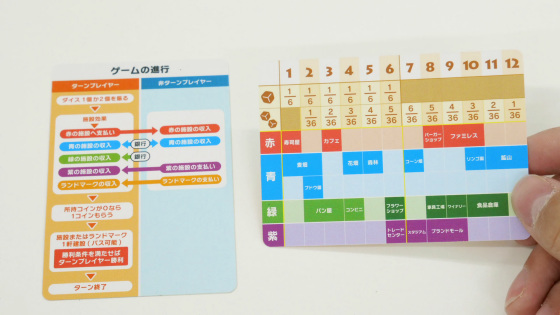 The basic gameplay of Machi Koro is very simple, with 3 steps: 'roll the dice', 'earn coins', and 'build a facility or landmark with the coins you earned'. 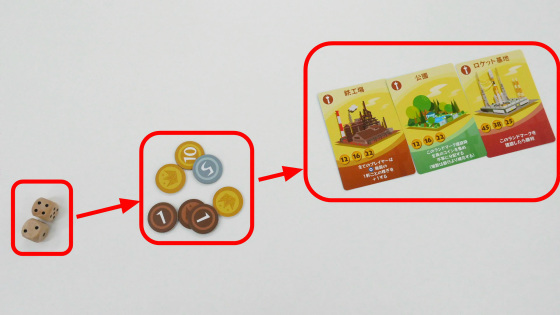 First, we will prepare before the game. Check the back of the landmark and the facility card, and separate them into the same ones. It can be divided into 3 types, so shuffle each one and put it face down as a 'deck'. Turn one card from each deck and arrange it on the right side of the deck, and continue until you finish arranging 5 types from each deck. If cards with the same name appear at this time, stack the cards on top of each other. Distribute 5 coins to each player and put the rest together in the field to become a 'bank'. There are three types of coins, '1 coin', '5 coins', and '10 coins', but this time we will distribute 5 copper coins each. After deciding to play in a clockwise order, each player will use his 5 coins to build the first facility. 'Construction cost' is written on each facility card, and coins for the cost are paid to the bank at the time of construction. For example, the following 'corn fields' can be built by paying 2 coins. Once each player builds one house in turn, do the same for two more laps. It's okay to use up all the coins in this first three laps of construction. On the contrary, it is also an ant to save coins later by not constructing it. 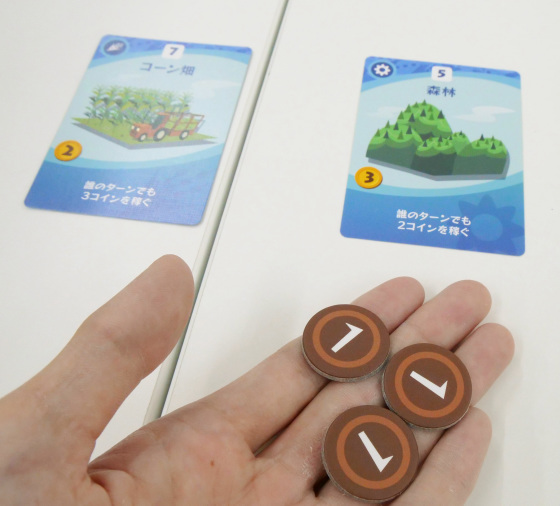 The game starts when everyone has finished their actions. Roll the dice in order from the start player. At this time, you can freely decide whether to roll both of the two dice or only one. Players who roll the dice can get the effect of their construction card with the same number as the die roll. For example, 'Wheat field' has the effect that you can earn 1 coin by rolling the dice and getting 1 or 2. Originally, only the person who rolled the dice will activate the effect of the card, but if you have a wheat field that says 'Anyone's turn', even if you are not your turn, you will get 2 dice. You will get coins every time you roll. The player who then rolls the dice can then build. If you don't have any coins at hand, you can get one coin from the bank. There are many cards with a construction cost of 1 in the field, so you can build more and more even in the early stages. After construction is complete, it's the next player's turn. The card with 'COMBO' written on the upper left has the potential to earn a large amount of coins by collecting cards with a specific mark. The effect of 'Food Warehouse' is that if you get a '10' or '11', you will get 2 coins for each card with the 'Tea Cup' mark on the upper left that you built. .. This time, I built only one house and earned only 2 coins, but building a lot will bring out the full effect. However, due to the limitation of 'only your turn', the timing to show its strength is limited. Landmark cards also have unique effects. 'Luxury French' is a landmark that allows you to collect 2 coins from everyone at the time of construction. However, some players didn't have any coins, so the number of coins they could get was reduced.

A player who has built two 'corn fields' that will receive 3 coins if the total number of dice rolls is 7 on any turn can earn 3 + 3 6 coins for each '7' roll. This player rolled too many '7' s during the game, and people around him complained, 'I think I'm doing it with squid!'. Roll the dice to earn coins and build facilities such as 'cafes', 'flower fields', and 'flower shops' to make the city richer and bigger. At the end of the game, when everyone reaches out to build three landmarks, something happens. The player with the fewest coins activated a card with the effect of 'getting half the coins from the player who has 10 or more coins on his turn', and from everyone who earned a lot of coins to build a landmark. , I also got a total of 27 coins. With the coins you earned, you will build the third landmark 'Rocket Base' and win a big turnaround. It took about 40 minutes for one game. The rules are very simple and easy to understand, so even people who have never played the previous work can easily play it. Since you can do something every turn, you will not be able to do anything and you will not get lost, and depending on the card you build, you may be able to aim for a reversal, so even beginners can enjoy it.

The price of Machi Koro-dori (Two) is 4090 yen including tax, but according to the official website , sales are currently suspended, and it seems that sales will resume after mid-January 2021.