Benchmark of Apple's original SoC 'M1' chip will be released, what is its ability?

At the distribution event '

One more thing ' held on November 11, 2020, Apple announced the first in-house SoC 'M1' for Mac, and this M1 chip is the new ' MacBook Air ' ' Mac mini ' It was revealed that it will be installed in all ' MacBook Pro '. Just one day after the announcement, benchmark results for the new MacBook Air, Mac mini, and MacBook Pro with M1 chips are available. The performance of the M1 chip has been clarified.

Apple Announces The Apple Silicon M1: Ditching x86 --What to Expect, Based on A14
https://www.anandtech.com/show/16226/apple-silicon-m1-a14-deep-dive

Announced extensively at Apple's distribution event 'One more thing'. He emphasized that the process node of the M1 chip is 5 nm and has 16 billion transistors, and the CPU is 3.5 times faster and the graphics are 5 times faster than the conventional product. 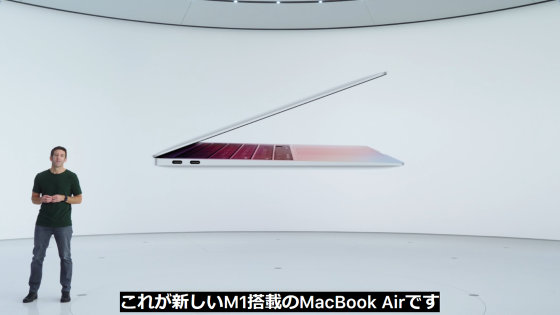 In this announcement, Apple also revealed details of the M1 chip. The appearance of the die is as follows.

On the left are eight high performance cores with a 12MB L2 cache codenamed 'Firestorm'. The

A14 chip Firestorm on the iPhone 12 has only 8MB of L2 cache, which is a big enhancement.

Near the center of the SoC are four high-efficiency cores code-named 'Icestorm', with an 8-core GPU occupying a large die area. The 16-core Neural Engine is common to the A13 and A14 chips.

Looking at the image below comparing the multi-core scores, you can see that the performance is not as good as the 2020 iMac Core i7, the 2017 iMac Pro, and the 2019 Mac Pro Xeon.