First of all, from 10 o'clock on Saturday, October 24, 2020, 'Kimetsu no Yaiba' Kyushu unlimited ride ticket + can badge set (15 types) '(20,000 yen including tax, shipping included) will be available for the first 2000 sets only. It will be released. The ticket is a hard ticket type and comes with the original mount. In addition, as original goods for purchasers only, a character inspired by the stamp of the digital stamp rally and a can badge of the wrapping train are included in the box. 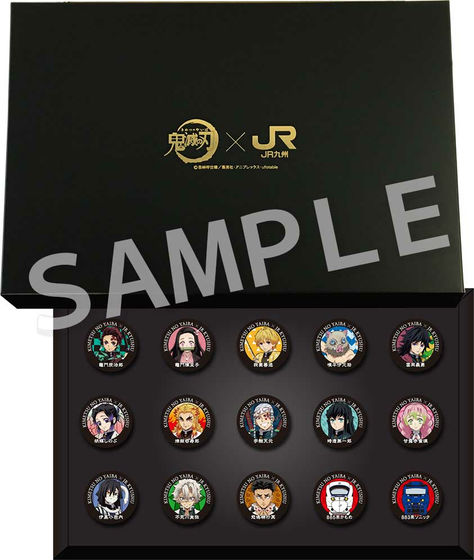 From October 26th (Monday), 'Kimetsu no Yaiba' collaboration special bento-Travel companion- '(1674 yen including tax) will be on sale. The menu consists of Kyushu specialties such as Yamaya's spicy cod roe and Miyazaki beef sukiyaki. The second original goods will be on sale from 10:00 on November 4th (Wednesday). ' ' Arita porcelain bean plate set of 3 '-Purgatory Anjuro, Kocho Shinobu, Tomioka Yoshiyuki- ' (5060 yen including tax) is sold in an original box.

SL Kimetsu no Yaiba '. The front side is decorated with motifs of Sumijiro, Kazumako, Zeni, and Inosuke. The back is an image design of SL. 'SL Kimetsu no Yaiba' is a special train with the head mark of 'Infinite', November 1st (Sun), 3rd (Tue), 15th (Sun), 21st (Sat), 23rd. I will run from Kumamoto to Hakata on (Monday). The steam locomotive No. 58654 to be operated is being manufactured in the same Taisho era as the 'Kimetsu no Yaiba', although parts are being replaced. 'The hired hitman hires a subcontractor' is repeated, and the 'fifth hitman' is born --GIGAZINE

Claim that loot boxes (gacha) should be classified as 'gambling' --GIGAZINE

Linus Torvalds, who had left the Linux community saying 'I will learn people's feelings', returns after a one-month blank period --GIGAZINE

Why did a Kenyan high school girl develop an app from a good idea? --GIGAZINE

A friend's cat who is surprised at the leaves pic.twitter.com/h5aTnWI1Yh

Public money is a major shareholder, 80% of the first section of the Tokyo Stock Exchange doubled from 4 years ago: Asahi Shimbun Digital

Mr. Ishiba, who made a dangerous bet, also dismantled the faction who resigned as general: Asahi Shimbun Digital

WEB feature He was abandoned at the station ... | New Coronavirus | NHK News

Certified as an industrial accident due to 'sexual harassment' without physical contact ... Relentlessly invite meals, chanting by email, ambushing at the station-Bengo4.com

Even if the husband consulted multiple times, the case did not occur and the woman died Saga Prefectural Police: Asahi Shimbun Digital

Apartment rent plummets at financial centers around the world, no longer in the 'center'-Bloomberg

Akafuku is coming to Tokyo Station! !! It's still piled up. .. .. Even though it's a weekday, there aren't many people. pic.twitter.com/RN6rW0wcRU

If you open the omikuji of the omikuji cat (peep cat) and see it ... https://t.co/Xup3fedRLu

The origin of the place name 'Maihama' in TDL, the land of dreams, was not 'Miami' --Mainichi Shimbun

When my younger brother was born, my mother said, 'I don't remember the baby I was born with, so if I could, I would like to congratulate my older child on'Congratulations on becoming an older sister.'' So, 'Congratulations to my sister' was delivered to me, and it was a start of my sister's life from the height of ecstasy. I hope you find it helpful.

'The copyright was not well recognized and my imagination wasn't working.' The 'Pakuri' problem that I think of Mai Katsumi, a former sento painter apprentice who burned up [ABEMA TIMES]

Even if there is a branch of the question, it is difficult to explain, so it is a strange answer ... It is on the way of the collection that it is quick to see and understand. pic.twitter.com/3I3eaKzsOz

I received iPhone12, so I scanned it with LiDAR.

Unlike the iPad, it can be handled quickly with one hand, and it is amazing that you can easily archive the space like this.
By the way, it's waterproof. # iPhone12 pic.twitter.com/xS5lOY6feH

Roaming in Rakuten Mobile's partner (au) line area will end in some parts of Tokyo, Osaka, and Nara after October! Guided by KDDI --S-MAX

It's been a year since DoCoMo couldn't fix the trouble with the online credit card procedure at My docomo. The service suspension period has exceeded 8,760 hours.

[Released today & reservation started! ] The monumental tower of the beautiful girl game is back ...!
Original: A remake version of elf 'Classmate' will be released on February 26, 2021!
Reservations have started from today at shops nationwide!
An early reservation campaign is also being held! https://t.co/TIXh2AyPsf #Classmate remake pic.twitter.com/arjnI3yHJf

Episode 4 'Demon Deception Part 4'
Thank you for visiting our website.

'Higurashi When They Cry'

Completely new, still to no one knows Hinamizawa # Higurashi pic.twitter.com/wF1HtPmAjc

— TV anime 'Higurashi When They Cry' is being broadcast officially (@higu_anime) October 22, 2020

#Kansai Committee 59 Sample magazine reading party
Saturday, October 31st 11: 00-18: 00
Held at Mydome Osaka [Meeting Room 3].
Participation fee 500 yen.
Let's write your impressions, publish them in the catalog, and support the writers! #Kansai Committee
* A part of the sample magazine is borrowed from # COMITIA130 .
* Admission may be restricted to prevent the spread of infection.

I wish I had it! Kirby's sake (not) pic.twitter.com/VN1aSbVpqL

Stop Keiichi, suppress the onset of Lena, watch the movements around you at any time, and go to school ...! pic.twitter.com/Jtr1NGZk8E

It's been a week since it was released.
Thank you very much for seeing it by many people.
Thank you for your continued support.

Geek blade. There are already 40 ... pic.twitter.com/ipu6g6CFnd

Sometimes people who don't draw pictures at all ask me, 'How can I get better?', But even if I explain it, I'm told something like 'I can't do it because I don't have a drawing heart,' so I don't know if it's appropriate as an analogy. However, it's not much different from the kanji test.
I'm sorry it's hard to read. pic.twitter.com/gc00jaGMRN

'Konodori Vol. 32' will be released today.
This is the final volume of Kounodori.
Tsuyoshi has only this last obi and pop! It was decorated with the comment. Kounodori was really happy thanks to the many people and readers who supported him! Thank you very much! See you someday! pic.twitter.com/spzFFoiWHq

I drew a Halloween illustration of Azur Lane ~ pic.twitter.com/dbbuWOrgAs

Since the composition is the same, it is easy to understand how the pattern changes and it is interesting. pic.twitter.com/yCmEpqm8Sm

done. A hamburger diary that has never been able to drink coffee in a warm state is pic.twitter.com/r5KvbieA65

Vinland Saga Volume 24, thank you for your patience, is on sale today! It is written on the obi as 'Vinland Founding Edition'. It's finally time! I'm glad that this manga Vinland Saga was really named!
It's very interesting, so thank you! pic.twitter.com/LM8fnJw0fS

A story about a single woman in her thirties who works in Ooku may or may not fluff a cat (1/3) pic.twitter.com/FxzmafpHVL

Feelings when touching each roll. pic.twitter.com/RUGuaXAD9t

For the time being, I wanted to paint Honma with Copic for the first time in a while, but I wanted to draw the background and sigma properly, but ... The two consecutive holidays are over ... Time limit ... I'm sorry ... I'm working again from tomorrow ... Eat ... the same deliciousness ... make it L size ... pic.twitter.com/uZE7w6jd7k

When I emailed this to Katayama-kun, who is in charge of demon annihilation, it seems that the current week's editors, Jean editors, broke down.

The 90's is a jet-black era where even black is thin. Ami Shibata #Ami Shibata #Road to the Hero

These 4 frames are also recorded [Road to the Hero] Click here for the full voice video https://t.co/dPm8yvkYgY pic.twitter.com/0cOdUKUPay

Made in Abyss Game Tutorial This is pic.twitter.com/I3Rg7Je2xs


US economic media analyzes Kodansha's manga business, which is different from Shogakukan and Shueisha | Courier Japon