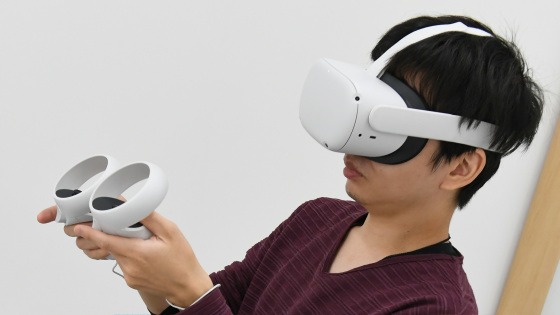 Oculus Quest 2 ' that appeared on October 13, 2020 is equipped with Qualcomm Snapdragon XR2 in SoC , built-in 6G RAM, screen resolution 1832 × 1920 pixels × 2, refresh rate 72Hz / 90Hz, high It is a stand-alone VR headset that allows you to enjoy VR content with the headset alone without a high-performance gaming PC. We asked the editorial staff, who said, 'I have never touched VR,' to experience what VR is actually enjoyed in Oculus Quest 2.

In addition to Oculus Quest 2, Oculus can also be accessed from smartphones. Since you can manage VR content without wearing a headset each time, it is recommended that you register in advance with the smartphone app before starting the setup of Oculus Quest 2. The Oculus smartphone app is available for iOS and Android o.

This time we will install the iOS version, so tap 'Get' to install it.

When you start the installed application, you will be asked to use Bluetooth, so tap OK.

Facebook is a real name SNS, but it is possible to set it so that the user name is displayed without displaying the real name on Oculus. First, enter your username in alphanumeric characters, then tap Next.

Next, set the Oculus activity and name display in 'Privacy Settings'. If you don't want your Facebook acquaintance to know your play status and you don't want your real name to appear on Oculus, you can select 'Only me' for both. After selecting the privacy settings, tap 'Next'.

Determine the PIN required to use the Oculus store using 4 digits. You need to register your credit card to purchase paid VR content on Oculus, but you can also register your card information later.

The screen for selecting the device to register is displayed, but this time, 'Not Now' is OK.

If you successfully register for an account, you will be taken to the Oculus store.

◆ Oculus Quest 2 setup
First, pull out the insulating sheet stuck in the battery box of the Touch controller. 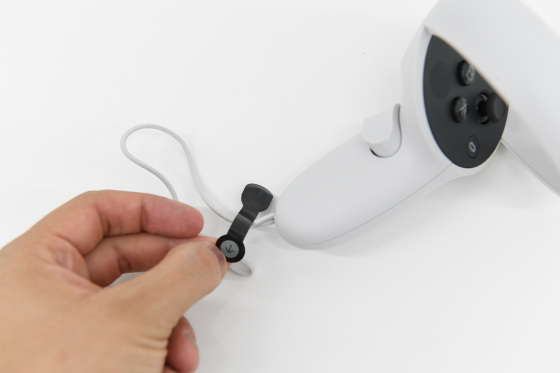 Pull the plastic parts on the back of your head firmly with both hands and tighten the belt to prevent the headset from wobbling. Unlike the original Oculus Quest and Oculus Rift S, the belt is a simple rubber belt, so the impression that the power to hold the head is weak. Therefore, the trick is to squeeze the belt a little stronger. The belt is highly elastic, so tightening it a little will not hurt so much. Furthermore, adjust the belt with Velcro. It's OK if the headset is fixed to the head. If you keep your glasses on, the nose pad will be pushed in, which may hurt some people, but you will get used to it as you adjust. If you are unfamiliar and hurt, you can attach a spectacle spacer to increase the distance between your face and the headset and reduce the pressure on your spectacles. 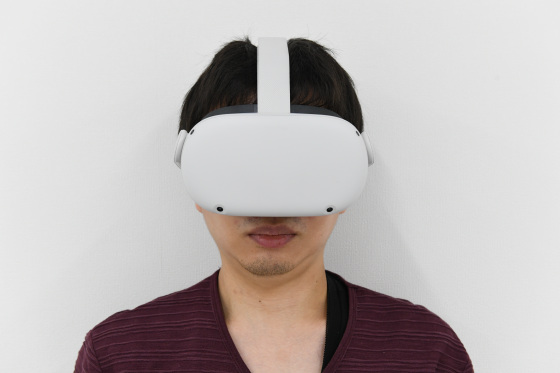 Seen from the side. There are no parts on the belt that wrap around the back of the head, so depending on the person, turning the belt so that it covers the ears may stabilize it. 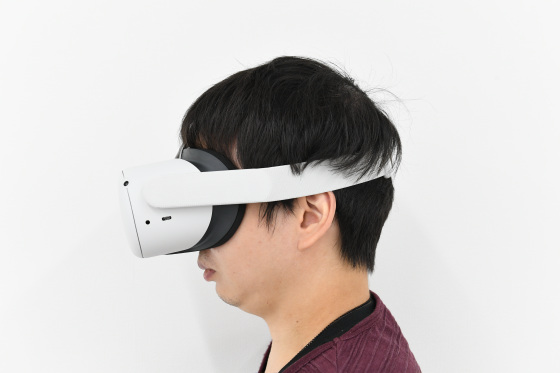 The gap in the nose is large, and if you cover it, the ambient light will jump in. The lower part of the field of vision looks completely light and white, so those who are interested should take measures against shading with a mask or towel. 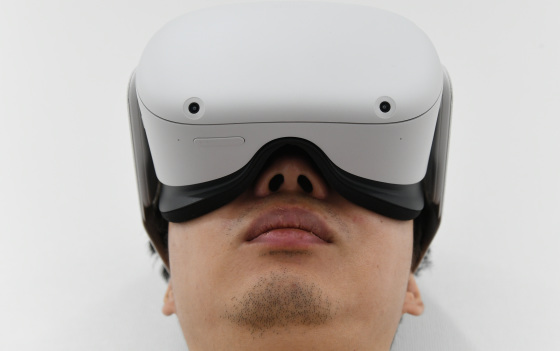 It is recommended to set up in a large area and sit down. The contents are pairing with Touch controller, Wi-Fi setting, visibility adjustment, agreement to safety policy. 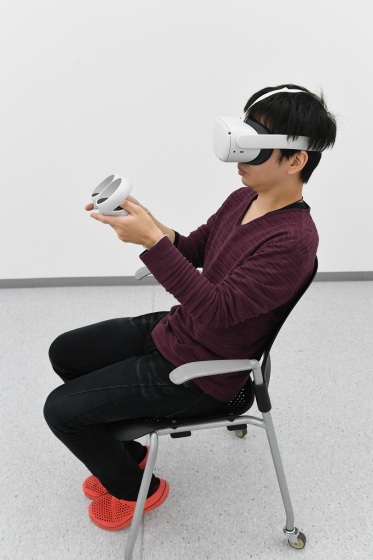 The interpupillary distance is adjusted by moving the lens directly by hand. When you pinch and move the lens, you can slide it left and right with a click to change the distance between the lenses. However, adjusting the interpupillary distance is meaningless unless you look at the screen, so the Oculus Quest 2 specifications, which are difficult to adjust without removing the headset, are a very disappointing point. Once you agree to the safety policy, the Oculus Quest 2 console will begin updating. Wait for a while while charging by connecting the USB Type-C cable. The update will be completed in a few minutes. 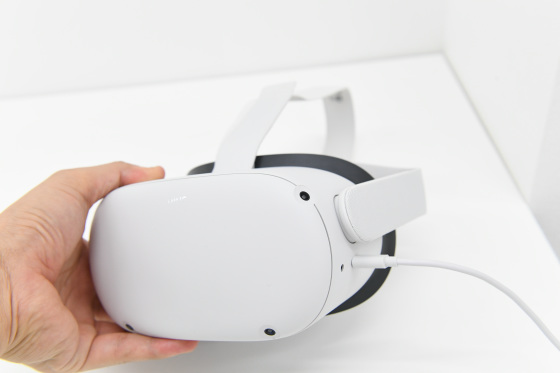 Link your account with Oculus Quest 2. The pairing screen will appear in Oculus Quest 2, so launch the Oculus app on a smartphone connected to the same Wi-Fi and tap 'Pairing'.

Headset pairing is complete. Even if you do not bother to enter the account ID and password from the Oculus Quest 2 side, if you register on your smartphone in advance, you can pair with one shot.

After pairing, set the guardian that will be the play area of Oculus Quest 2. Attach the controller to the floor and set the altitude ... Use the Touch controller to draw a line on the floor to set the area. The screen of the VR headset shows the surroundings through the camera that acts as a sensor. If you set the area ... VADER IMMORTAL: A STAR WARS VR SERIES ' that I also played on the previous model Oculus Quest. The editorial staff who is playing VR has never done it before, but I was able to get used to the operation immediately because of the intuitive and simple content.


The advantage of Oculus Quest 2, which is a stand-alone VR headset, is that it supports 6DoF that can move freely in 6 directions of front and back, left and right, up and down, and because there is no cable, you can move and play as much as you want. .. Perhaps because the display has changed from organic EL to liquid crystal, the production of darkness is still going up to the first Oculus Quest. Even so, the increased resolution gives the impression that the immersive feeling in the VR space has increased. After all, there was an opinion from the editorial staff who played as the resolution increased, 'Even if you suddenly turn around or move your neck, the screen will move firmly without cluttering, so it may be harder to get drunk than you expected.' .. Kizuna AI --Touch the Beat! ', Which is distributed free of charge. The game can be obtained not only from Oculus Quest 2 but also from the Oculus app on your smartphone.

The game itself is about hitting a cube that flew with two penlights, and if you can hit in succession, Kizuna AI on the stage will approach, and if you fail, you will go far. You can see what kind of game 'Kizuna AI --Touch the Beat!' Is actually in the following movie.

'Kizuna AI --Touch the Beat!', Which you can play for free on Oculus Quest 2, moves Kizuna AI closer and further away --YouTube


The position of the ouch controller is captured accurately, so even a small cube will hit properly. Also, when it hits, the Touch controller vibrates, so I was able to know exactly where I was hitting in the VR space. The sound can be heard from the speaker built into the base of the belt, but if you want to stick to the left-right balance and fine sound, it is better to use earphones connected to the output terminal. Similarly, in the rhythm game ' Space Channel 5 VR Arakata Dancing Show ', the body of a new female reporter who will be her avatar is projected. While holding the Touch controller with a shout of back, I dance with 'Up! Chu! Chu!', But as you can see in the movie below, the avatar moves naturally depending on your position and the movement of the Touch controller. I did.


Among the VR devices that often cost more than 100,000 yen when the set is complete, Oculus Quest 2 is available for 30,000 yen and can be played without a PC, so there is no cable, so you do not have to think about handling in the room Besides, it doesn't require sensors, so even people who have never touched VR can easily set it up. In addition, you can comfortably play VR games with specifications that are so high that you can't think of it as a stand-alone type.

Furthermore, even for those who want to enjoy VR content that Oculus does not have, although Oculus Quest 2 is attractive, if you have a PC with performance that can support VR, you can use Oculus Link to connect to the PC with a USB Type-C cable. Therefore, Oculus Quest 2, which is originally a stand-alone type, can be used as a PC-connected VR device, and not only Oculus but also SteamVR can be used, so it is possible to use it properly according to the game and situation you want to play. Therefore, it is well worth getting not only for beginners who are interested in VR, but also for intermediate to advanced users who are exposed to VR content on various platforms such as Oculus and SteamVR. 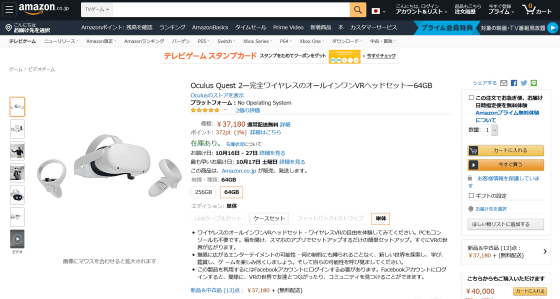 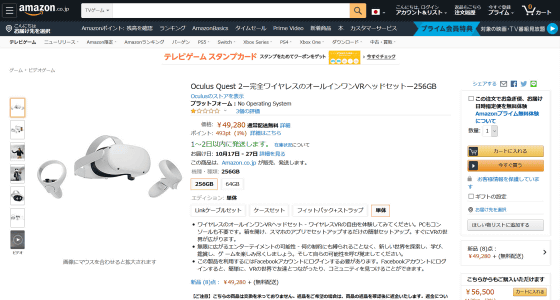