In recent years, there are many cars equipped with a system that can be remotely controlled via the Internet, but at the same time, these cars have the weakness that they cannot be remotely controlled in places where there is no Internet connection. As if to make this problem manifest, Ferrari became a paperweight in the basement where there was no internet connection.

Dude comes straight from the dealership for a car-seat installation, but halfway through the car disables itself (I'm guessing some anti-tamper safeguard). Hilariously, the boys at Ferrari can't remotely fix it because there's no reception undergo und. : Justrolledintotheshop

A Reddit user named Zeromindz said on October 10, 2020, 'Ferrari, which I was driving from an agency to install a car seat, got stuck in the middle of the road (I think it's because of its anti-tamper function ). , The boys on Ferrari can't fix it remotely because the location is underground. ' The following is Ferrari that got stuck underground. Reddit has pointed out that this is a weakness of things that work with remote connections. However, Hacker in the News 'contributor but has been estimated to tamper function has become stuck in reason, another reason is conceivable' that the opinion . According to a person named LeonM, many modern cars with airbags have a sensor on the seat, and the airbag is turned off when the sensor determines that it is 'unmanned.' Since Zeromindz wrote that 'Ferrari was taken underground to install the seat', it is possible that an error occurred in the safety system when the seat was removed and it became impossible to drive itself. There is.

Ferrari is bricked during upgrade due to no mobile reception while underground | Hacker News
https://news.ycombinator.com/item?id=24754662 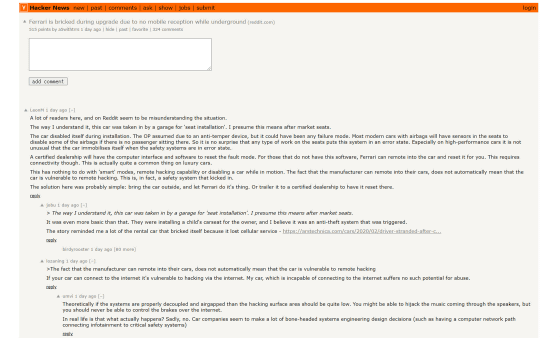 Authorized retailers have software to recover from such errors, but if you don't have these tools, you'll have to remotely connect to the manufacturer over the Internet and try to recover. In this case, the error cannot be recovered due to lack of internet connection, but Leon M thinks that the error itself has nothing to do with the 'smart mode' of the car.

However, even for LeonM's opinion, 'a simpler, paperweight of the Ferrari is simply' Do not for the theft prevention function 'was activation of car' further from the user named jobu and you have a plunge .

On the other hand, in February 2020, when a woman was driving on a mountain road with a car rented for car sharing, she could not receive telematics radio waves and the car stopped, and she got stuck without being able to make a phone call. The situation is also happening.