The results of ' Nikon's Small World ' 2020, which competes for images of the microscopic world that cannot be seen with the naked eye through a microscope, have been announced. The award-winning works that have been judged not only for the beauty of the images but also for their 'significance in science' are open to the public.

◆ 1st place: The back of the zebrafish juvenile
The first is a photograph of a zebrafish juvenile by Daniel Castlanova, Brandt M. Weinstein, and Baccary Samasa of the National Institutes of Health. It is created by stitching together more than 350 images taken by a confocal microscope that can take fluorescent images, and the skeleton is colored blue and the lymphatic system is colored orange.

Regarding the images taken, Kastranova said, 'Not only are the images beautiful, but they also show how powerful the zebrafish lymphatic vessel development model is. This type of lymphatic system is thought to occur only in mammals. By continuing to study the lymphatic system of zebrafish, the scientific community has the potential to drive innovation in a variety of research and clinical trials, from drug testing to cancer treatment, because fish are better than mammals. It's much easier to breed. '

Dylan Burnett, one of the judges at Nikon's Small World, said, 'It takes an interesting scientific perspective to push images to the top in the judging. Kastranova's images are instantly clear, beautiful and scientifically meaningful. It was the only image that caught the attention of the judges and all the judges agreed. '

◆ 2nd place: Clownfish embryo
The following is a photograph of

clownfish embryos taken at 10x magnification. According to Daniel Nop, who works for a German publishing company, the embryos are from the left on the 1st, 3rd morning, 3rd evening, 5th, and 9th day after fertilization. .. 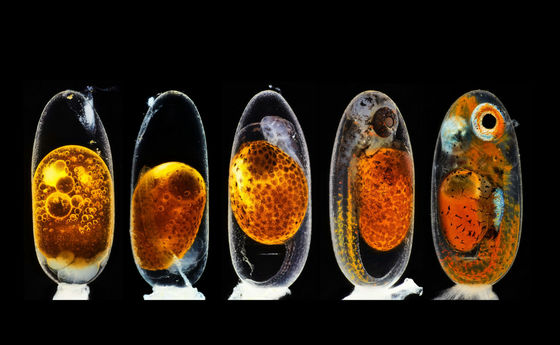 ◆ 3rd place: Snail's Radula
It looks like a colorful feather, but it's actually a snail's ◆ 5th place: Bogong moth head
According to one theory, the Bogong moth , which is said to 'taste popcorn,' was shot at 5x magnification in the image below. The Bogong moth, photographed by Saipem's Ahmad Forzan, is captured in detail, including compound eyes and individual hairs. ◆ 6th place: Hebe's fast
It is a mysterious image of colorful grains of red, blue, and yellow, but this is called '

Yaku ', which is an organ of the stamens of flowers called Hebe . Yaku is the organ that produces pollen, and the colorful grains are Hebe's pollen. The image was taken at 10x magnification by Robert Marcus and colleagues at the University of Nottingham Department of Life Sciences. ◆ 7th place: Intracellular microtubules
Below is a 63x magnified cell photographed by Jason Kirk of Baylor College of Medicine. The intricately intricate orange thin lines are the cell

microtubules , and the light blue round objects are the cell nuclei . 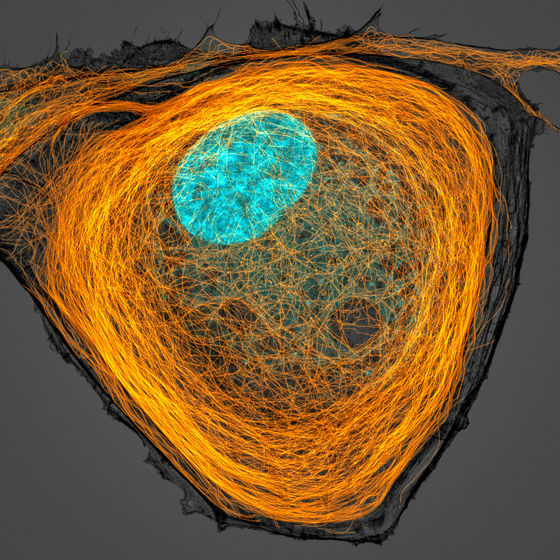 ◆ 8th place: Chameleon embryo
The following image shows a chameleon embryo that has already grown to look like an adult chameleon at a magnification of 10x. Photographed by Alan Carilo and others from the Department of Biochemistry, Queen Mary University. 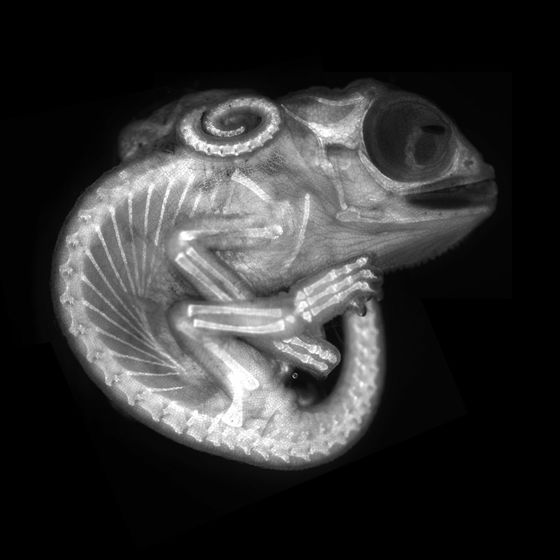 ◆ 9th place: Neuron connection in the hippocampus
The white highlight in the image is a

63x magnification of one of the neurons in the hippocampus of the brain, showing how it connects to adjacent neurons. The filming was done by Kirk and others at Baylor College of Medicine, who were also ranked 7th. ◆ 10th place: Daphnia magna
In the image below,

Daphnia magna, whose body length is about 5 mm, is photographed at a magnification of 10 times. By Mr. Forzan, the same as 5th place. In addition to the works introduced in the article, the award-winning works and winning works after the 11th place are published on the official page below. At 'Nikon's Small World' in 2020, a contest for the movie category was held in addition to the photo category. The results of the movie section can be seen in the following articles. 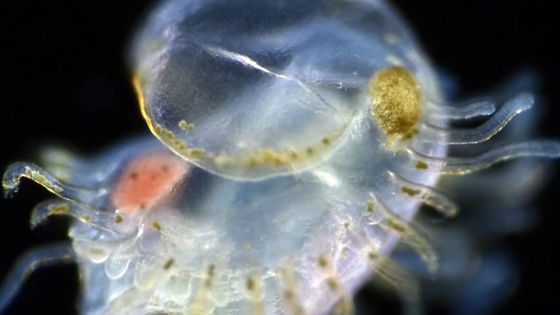