The EU's Copernicus Climate Change Service (C3S) announced on October 7, 2020 that 'September 2020 was the hottest September in observation history.'

2020 Had the Warmest September on Record, Data Shows --The New York Times
https://www.nytimes.com/2020/10/07/climate/hottest-september.html 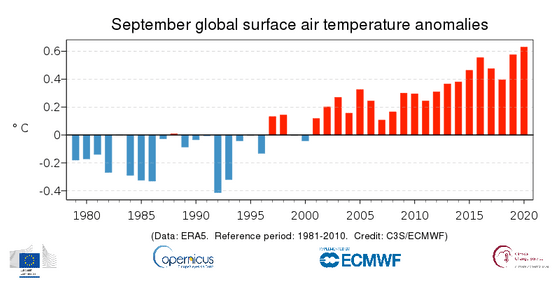 ???? ️ Globally and in Europe, September 2020 was the warmest September on record, with well above average temperatures in many regions
???? ️ Cool La Niña conditions in eastern tropical Pacific

Among them, Siberia, Russia, was hit by an unusually high temperature. The temperature from winter to spring in this area was unusually high, for example, the temperature in May 2020 was 10 degrees Celsius higher than usual. This trend continued into the summer, with some observatories recording a maximum temperature of 38 ° C, which is unusual for the Arctic Circle.

In April, the US National Oceanic and Atmospheric Administration (NOAA) announced a forecast that '2020 is about 75% likely to be the hottest year in history and more than 99% likely to be in the top five.' It is expected that the temperature will continue to be higher than usual.

Freyja Van Borg, a senior researcher at C3S, told Reuters that 'when temperatures rise, extreme meteorological phenomena such as heat waves and heavy rains occur frequently and become more severe. Greenhouse gas emissions If the quantity remains the same, the earth will warm up even more. '