It turned out that May 2020 was the hottest May in observation history, and in Siberia it exceeded the past average by nearly 10 degrees Copernicus Climate Change Service (C3S) , National Aeronautics and Space Administration (NASA) , and National Oceanic and Atmospheric Administration (NOAA) announced that 'May 2020 was the hottest May in history'.

C3S said, 'Extremely unusual temperatures were observed over Siberia in Russia, and in the lower reaches of the Obi and Yenisei rivers in the northwest, the average temperature for 1981-2010 was nearly 10 degrees higher. Reports that river ice has collapsed at a record early time.'

Goddard Institute for Space Science said in a tweet on June 13, 'The abnormal value of the global average temperature in May 2020 was 1.02 degrees higher than the average of May 1951 to May 1980'. I reported.

Monthly GISTEMP Surface The Temperature Analysis Update Has Been Posted. The Global Mean Temperature Anomaly For May 2020 Was 1.02 ° C Above The 1951-1980 May Average. Https://T.Co/EDTZWL4pYk Pic.Twitter.Com/k8cirFMycP

NASA has also released monthly global average temperatures since 1880, again showing that temperatures in May 2020 are 'higher than in any May after 1880'. From this data, Yale Climate Connections, a climate phenomenon-related information service led by Yale University, said, ``All five months since the beginning of 2020 ranked in the top 20 of the warmest months in the past 1684 months. users had 'and pointed out . 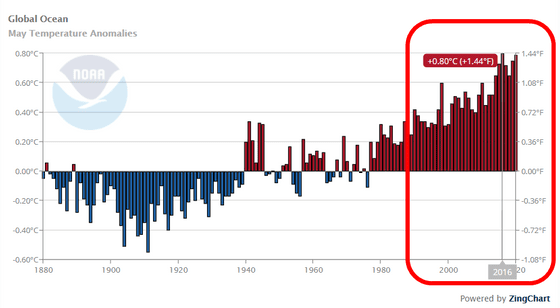 C3S climatologist Freja Vamborg said, 'May 2020 was the hottest record on record in May, which is definitely a warning sign. The last 12 months, June 2019 to May 2020, was as hot as the hottest year of the dataset so far.”