I bought a 'shrimp chili sauce set meal' at Matsuya, where white rice goes crazy with chili sauce with plenty of shrimp. Matsuya's special chili sauce, has been released on September 22, 2020 (Tuesday). For shrimp chili, which is made with authentic chili sauce with doubanjiang, ginger, and garlic, white rice is steadily advancing, and a large set meal of rice will be free for a limited time until October 6, 2020. I actually took out at Matsuya and tried it. In commemoration of the appearance of the new menu, there is a poster on the shop front that appeals that a large serving of rice is free. That's why I entered the store and ordered at the ticket vending machine ... I brought it back. This is the 'shrimp chili sauce set meal'. 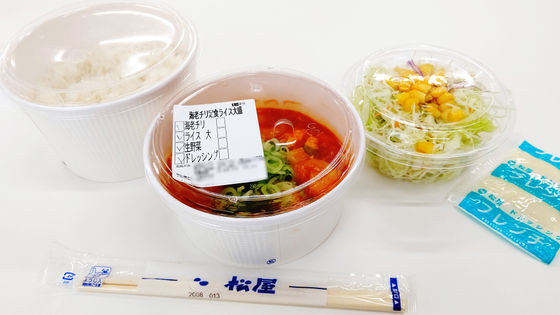 Chili sauce contains shrimp and eggs and is topped with chopped green onions. Comparing the chili sauce container with a 15 cm ruler, it looks like this. For rice (left), select a large serving. Raw vegetables (right) are also included in the set. 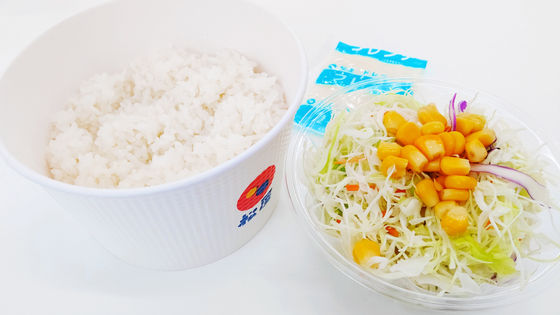 The shrimp has a crispy texture, and it goes well with the umami of doubanjiang and the spicy sweetness of chili sauce. Authentic chili sauce doesn't feel so spicy at first, but it's spicy to slowly squeeze in later, so it's best to avoid people who don't like spicy sauce and small children. The shrimp chili also contains fluffy eggs, so you can enjoy the difference in texture from the crispy shrimp. The sweet and spicy seasoning of chili sauce makes the white rice explode. When I inadvertently sprinkled chili sauce on rice to make a shrimp rice bowl, a large serving of rice disappeared into my stomach in an instant. Eating crispy raw vegetables refreshes the mouth filled with the spiciness of shrimp chili, so it's perfect for resting chopsticks. The 'shrimp chili sauce set meal' can be ordered at Matsuya nationwide from September 22, 2020, and the price is 730 yen including tax. In addition to being able to take out, if you eat it in the store, you will also get 'miso soup' for free.