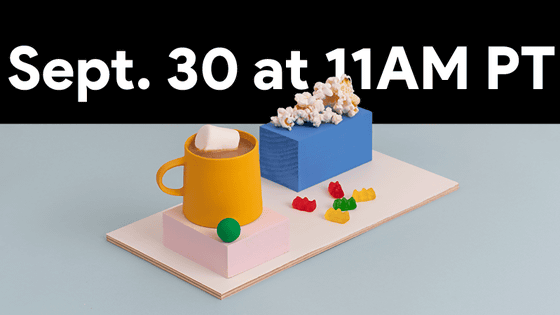 Get your popcorn ready for

#LaunchNightIn .
Click below to know when to tune in. ???? pic.twitter.com/RpKOinCDHj — Made by Google (@madebygoogle) September 14, 2020

Google has created and published a FAQ page about this event, in which everyone can see the event, and what will be announced in the event is 'new Chromecast' 'latest smart speaker' 'new It is revealed that it is a 'Pixel series'.

In the Pixel series, after the Pixel 4 and Pixel 4 XL were discontinued in early August 2020 and the lineup was temporarily blank, the low-priced model Pixel 4a has appeared from August 20, 2020. I will. The next flagship model, the Pixel 5, is expected to be announced at this event. It is also believed that a 5G compatible version of Pixel 4a may be announced.

Google smartphones 'Pixel 4' and 'Pixel 4 XL' are no longer sold, the shortest life in the series --GIGAZINE