Many voices say that it has become difficult to use in Firefox 79 for Android, and that it is sad news that this is as Mozilla intended 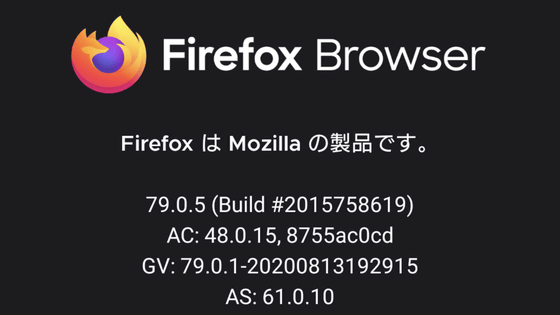 In line with the official release of 'Firefox 80' , the version of Firefox for Android has also reached version 79 and has undergone a major update. It used to be said that something like ' Firefox Quantum ', which was a major evolution of the Firefox desktop version, has arrived, but that is why confusion is rising around the world.

If you think Mozilla pushed a broken Firefox Android build, good news: It didn't. Bad news: It's working as intended • The Register
https://www.theregister.com/2020/08/25/firefox_android_update/ The news site The Register said, 'To those who think that Mozilla has released a broken Android version of Firefox. [Good news] No such thing [Sad news] It works as intended,' a fairly radical title The attached article has been released.

There are certainly voices that say that this update has made it easier to use, but according to the Google Play review, many reviews with a few stars have been posted recently, which is unacceptable for the majority of users. You can see that it was an update. It is not limited to Firefox that you can see that the appearance and behavior change when updating software. However, it is possible that the reason why the repulsion was particularly great in this Android version of Firefox is that the large update was a long time.

The desktop version of Firefox (for Windows, macOS, and Linux) is updated once every six weeks. The update may be a different level as software in the first place like Firefox Quantum, but most of them are security fixes and minor feature additions/fixes.

Firefox for Android has also undergone minor security fixes, but when it comes to major updates, it has been almost a year since Firefox 68 was released in July 2019. Moreover, this update was a big update comparable to the release of Firefox Quantum known as a large desktop version update called 'Firefox Daylight', so people who are used to the conventional environment feel a big difference. It is thought that it was decided.

However, if there is a major specification change, there are cases where it was 'easy to use once you got used to it', but this time when reading the review, there are quite a few indications that 'I could not do XX that was done in the previous version' doing.

The Register has picked up some voices from overseas users.

'It's the worst'upgrade' I've ever had,' Martin Lindenmeier denies the latest version. 'I've been using Firefox before Firefox,' said Ace Medlock. 'After the update, it just crashes every few minutes when I try to search, and I can't even click the 'crash' link in the help.' .. Filippo Contour, who has been using it as the main browser on various platforms, also commented, 'I have lost support for the most important add-ons when using Firefox.'

Regarding downgrade, Mozilla answered in the FAQ, 'If you upgrade to a new browser, you will not be able to revert to the old browser.'