AR Core Depth API, which enables you to easily create advanced AR content by generating depth map with a single camera, is now available on hundreds of millions of Android devices 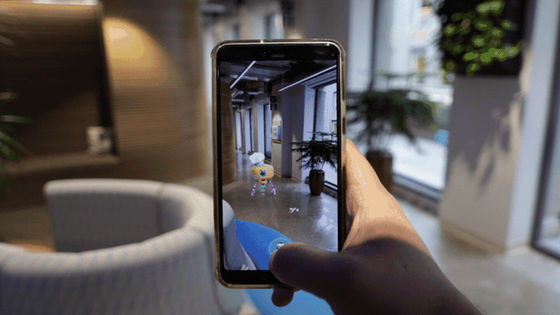 Google is developing AR content platform ' ARCore ' to enhance augmented reality (AR) content for Android and Unity. At the end of 2019, a preview version of the ARCore Depth API will be released as an API that will allow you to generate a depth map with a single RGB camera, but this time, all ARCore Depth APIs compatible with ARCore 1.18 or later have been released. It was announced that it will be available on Android devices.

Google cites 'occlusion' as the most important feature of the ARCore Depth API. This is a function that allows digital objects represented by AR to be displayed accurately behind objects in the real world, and by supporting occlusion, objects represented by AR feel as if they really existed in the real world. Now, the quality of AR experience will be greatly improved.

For example, like the GIF image below, it is occlusion that allows the machine character expressed in AR to appear accurately from the shadow. Normally, this kind of expression is impossible unless the distance of the object is measured correctly, but the ARCore Depth API can generate an accurate depth map with only a single camera, so this kind of expression is possible. Will be.

'Though depth sensors such as the ToF sensor are not absolutely necessary for the ARCore Depth API to work, they do improve the quality of the AR experience,' Google said.

Soo Wan Kim, Samsung Camera Technical Product Manager, who promised to update the Quick Measure app to use the ARCore Depth API on the Galaxy Note10+ and Galaxy S20 Ultra within the next few months, said: “ARCore Depth API By unlocking ToF and ToF, you can reduce the depth scanning time and detect planes with less texture at high speed, which makes AR apps a more seamless experience for users. We will be able to provide it.'

Illumix, a game studio that developed a game app called Five Nights at Freddy's AR: Special Delivery , uses the occlusion function of the ARCore Depth API to hide a specific character behind an object, creating an amazing fear experience. I will.

Lines of Play , where you can create domino art with AR, and...

Other examples of using ARCore Depth API are TeamViewer Pilot , which is a remote assistance solution using AR.

It should be noted that Google not only publishes ARCore Depth Lab, which is a collection of ARCore Depth API sample sets, as an application...

It is also available as an open source GitHub project. 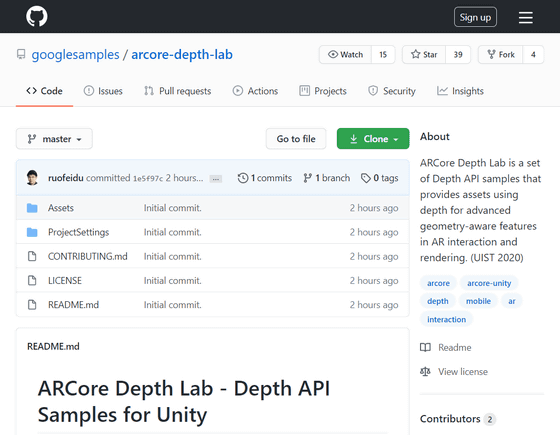