How close is the performance of the Amazon-designed ARM processor 'Graviton 2' to Intel CPUs? 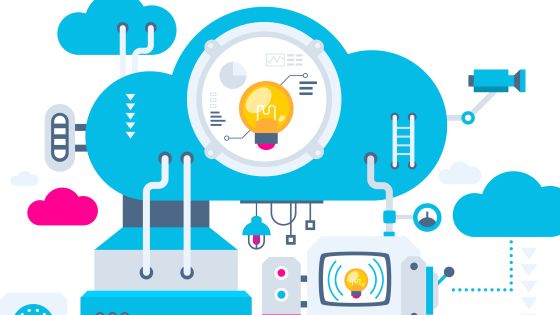 Graviton 2 ' announced in December 2019 can already be used on AWS EC2 M6g instances . Frank Wessels , an engineer of the online storage service ' MinIO ', compared the performance of the Graviton 2 with CPUs of Intel and AMD, and said that it was shocked by the result.

MinIO is an AWS S3-compatible online storage that is Apache license compliant. MinIO is developed by Go to maintain high performance. Wessels says the computationally expensive algorithms that MinIO uses are erasure correction , hashing, and encryption.

Also in the hash calculation, the result is that Skylake beats single core and Graviton 2 wins multicore.

A similar trend can be seen in AES encryption benchmarks. 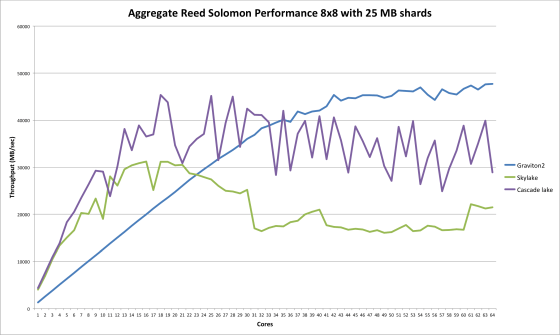 Wessels decided to measure the performance of erasure correction by narrowing the socket used to one in order to further match the conditions of the comparison target. In this benchmark, AMD's 'EPYC 7R32' provided by c5a instance is also included in the measurement target. As a result, it is not much different from the previous graph, but Wessels says that it is a more “smooth” graph. While Intel CPUs with a small number of physical cores in one socket are at their peak, Graviton 2, which can use 64 cores, does not show a drop in performance. 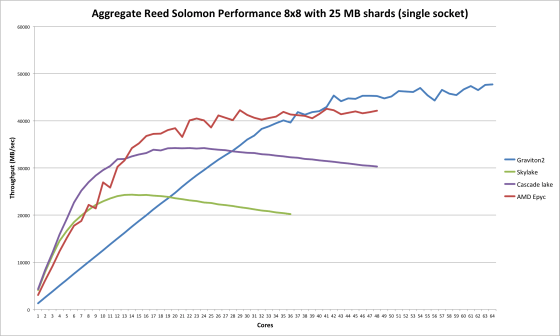 In addition, EPYC achieves better scale-up than Intel CPU, but in the high-end area Graviton 2 is one step behind. The graph immediately above shows 'dual socket servers are competing for memory access, which has a significant performance impact,' Wessels said.

Also, regarding the power consumption and usage fee per unit, it looks like this when the number of vCPUs and the number of physical cores are calculated as a unit. Mr. Wessels commented that the reason for showing this table is 'the effectiveness of hyper-threading greatly changes depending on the case to use'.

With the introduction of Graviton 2 by AWS, ARM processors are not only narrowing the gap with Intel's CPUs, but even exceeding multi-core Intel, Wessels points out. In addition, Mr. Wessels also talked about Ampere, which is developing an ARM processor for servers as Amazon, and commented that Amazon is not the only one paying attention to ARM.