The endemic Espanola giant tortoise (Chelonoidis hoodensis) , which lives on Espanola Island in the Galapagos Islands , was once in danger of extinction, but one male called `` Diego '' mated and produced 800 descendants. The crisis was avoided, leaving. It is reported that Diego, who saved the auspicious species from extinction, finished its role as a 'seed turtle' and returned to the island of Espanyola, the island that was born in decades.

Diego, The Magnificent Hero of The Galapagos, Has Finally Returned Home
https://www.sciencealert.com/diego-a-stud-of-a-giant-tortoise-is-finally-back-home 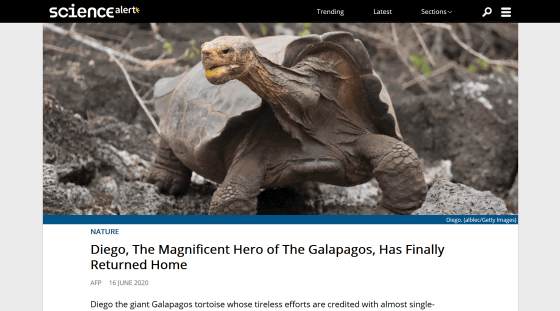 Santa Cruz Island as a turtle. I had to bring him to Galapagos National Park .

At that time, Diego, which was bred at the San Diego Zoo in California, was known to be a tortoise in the Galapagos Islands, but the exact species was not known. When a DNA test was performed there, it was confirmed that Diego was an Espanola giant tortoise, so in 1977, Diego was transferred to Santa Cruz Island in anticipation of its role as a seed turtle.

With a weight of about 80 kg, a height of 1.5 m, and a length of 90 cm when you stretch your neck and legs, Diego shows amazing work as a seed turtle on Santa Cruz Island and repeats mating with females to make 800 animals. Succeeded in leaving the descendants. By the end of the program, there were as many as 2000 individuals, of which nearly 40% were born due to the work of Diego.

On January 10, 2020, the Galapagos National Park authorities decided to 'end the breeding program' in response to the birth of many offspring, the eradication of alien species, and the successful cultivation of cacti as food. As a result, Diego, already over 100 years old, has ended its role as a seed turtle for decades. 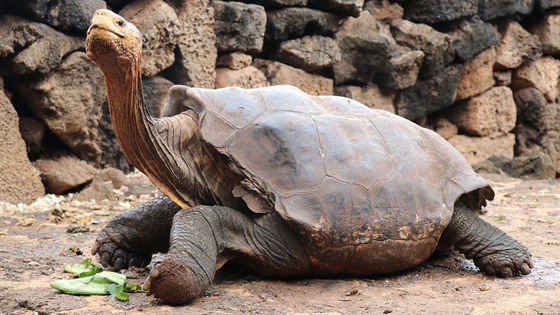 And on June 15, 2020, Ecuador's Environment Minister Paulo Proaño Andrade reported that 15 Espanola giant tortoises, including Diego, who contributed to the breeding program, returned to Espanola Island. “Your island welcomes you with open arms,” Andrade said.

In order to prevent the Diegos from affecting the ecosystem of Espanola Island, a certain quarantine period was set before landing on the island, and consideration was given to not bringing in plant seeds. And on June 15, the Diegos were able to return to Espanola for the first time in decades.

In addition, Diego was bred at the San Diego Zoo for over 30 years at the beginning of the program, but it is said that it was originally an individual born on Espanola Island. Diego was born on Espanola before 1920 and was caught and sent to the United States between 1928 and 1933, so Diego returned to Espanola for the first time in a century.