'Fifth state of matter' produced at the International Space Station Bose-Einstein condensation (BEC) is considered to be the 'fifth state of matter' after solids, gases, liquids, and plasmas , and 'a population of particles suddenly falls to the lowest energy level below a certain temperature.' It is the state.

When BEC occurs, the wave functions of each atom start to overlap each other, and the whole particle system behaves as the same wave. In the final condensate, each atom behaves as a macroscopic quantum state represented by one wavefunction, and behaves coherently .

The BEC was predicted in 1925 by physicists Satiendola Bose and Albert Einstein . And in 1995, 70 years after the prophecy, the research teams of the University of Colorado and the Massachusetts Institute of Technology succeeded in realizing BEC. Researchers who have successfully realized BEC have been awarded the 2001 Nobel Prize in Physics for this experiment.

In order to realize the BEC state, it is necessary to capture atoms cooled by laser cooling to a temperature as close as possible to an absolute zero of several micro K (Kelvin) to several hundred nano K using a magneto-optical trap or the like. However, there is a problem that it is difficult to control the BEC state accurately because gravity affects atoms on the ground.

Therefore, the research team, which includes three researchers who achieved BEC in 1995 and won the Nobel Prize, proposed an experiment to realize the BEC state in outer space where gravity is weak. In response to this proposal, NASA will use the ISS in May 2018, and in November of the same year, a German research team will conduct an experiment aiming to realize BEC in a microgravity environment using a meteorological rocket. It was 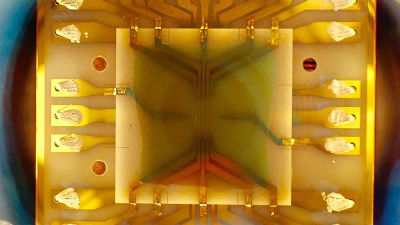 David Abrine, who led the research team, said, ``The study of BEC in a microgravity environment is an experiment on general relativity, and dark matter for the purpose of exploring underground minerals of planets such as spacecraft navigation and the moon. It may be useful for various research such as gravitational wave research.'