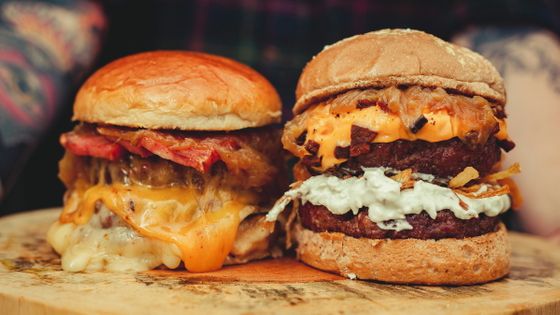 Due to the epidemic of the new coronavirus infection (COVID-19), people cannot go out and play, so at least many people try to eat delicious food at home and try to relieve their stress. Although some people may be overwhelmed by fat-rich food, a research team at Ohio State University says that a diet with a high amount of

Our ability to focus may falter after eating one meal high in saturated fat: Study also looks at effect of leaky gut on concentration --ScienceDaily
https://www.sciencedaily.com/releases/2020/05/200512134433.htm 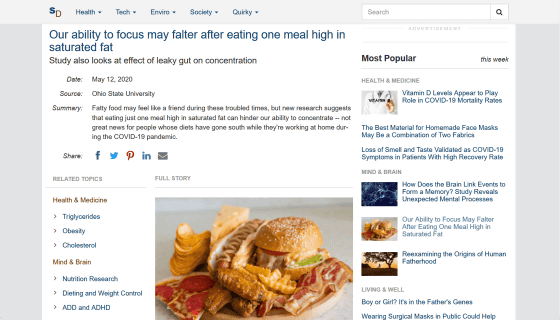 Annelise Madison, the lead author of this paper and a researcher in clinical psychology at Ohio State University, conducted an experiment with 51 women in their 40s and 60s. The test subjects visited the laboratory on the morning of the experiment, completed a test using a computer to check their attention, concentration, and reaction for 10 minutes, and ate a meal prepared by the research team.

There were two types of meals provided by the research team, each containing eggs, biscuits, turkey sausage,

gravy sauce containing 60 g of fat, but one menu was palmitic acid , a kind of saturated fatty acid Rich in oil, the other menu used sunflower oil rich in oleic acid , an unsaturated fatty acid . The total energy of both meals was 930 kcal, and the foods and nutrients contained in them all imitated the meal contents of the fast food restaurant.

Five hours after eating, subjects again took the test to check their alertness, concentration and reaction. Subjects also returned to the lab one to four weeks after conducting a series of experiments. On the second visit, the subjects had the opposite type of meal they had when they first performed the experiment, and they had the same test with the meal in between.

The research team also collected blood when the subjects were hungry and checked for biomarkers of inflammation due to the invasion of endotoxin into the blood. It seems that endotoxin easily enters the blood from the intestine when it becomes a leaky gut in which a hole is present in the mucous membrane of the intestine and bacteria, viruses, and proteins leak into the blood vessels. 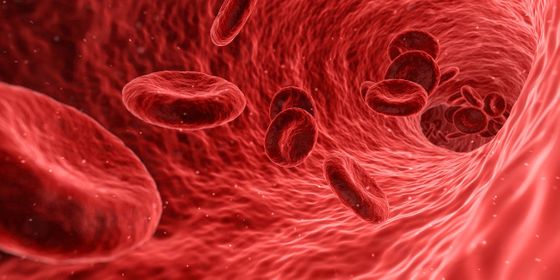 As a result of the experiment, subjects after eating a diet rich in saturated fatty acids dropped their test scores by an average of 11%. Researchers also noted that women with signs of leaky gut had extremely low test scores regardless of the type of food they ate. 'In women with high levels of endotoxin in their blood, the difference in diet was eliminated. Whatever fat the subjects ate, performance was poor,' Madison said. ..

cross the blood-brain barrier , so saturated fatty acids may affect the brain. 'There may be direct interactions between the fatty acids and the brain,' Madison said. Studies have shown the power of intestinal-related dysregulation. 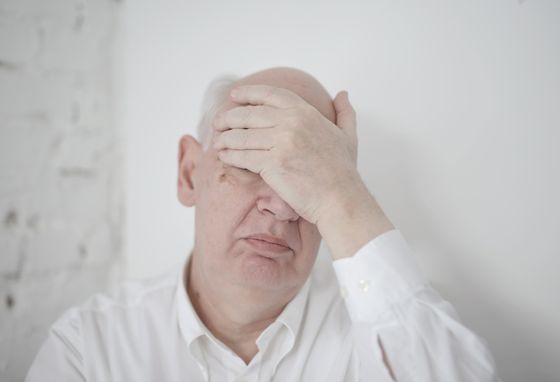 Janice Kiecolt-Glaser , a clinical health psychologist at Ohio State University who was involved in the study. He pointed out that the study suggests that people who are stressed by COVID-19's pandemic may be less able to concentrate and be alert if they prefer foods high in saturated fatty acids. Professor Kiecolt-Glaser said the actual impact could be even greater, as depression and strong anxiety can also reduce concentration and attention.