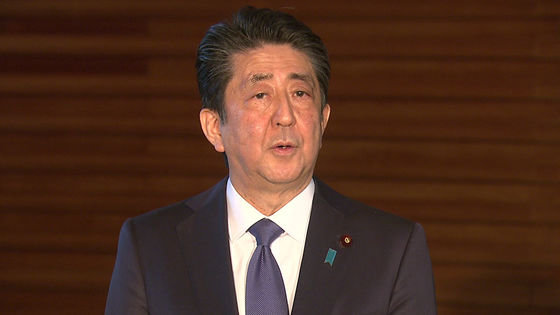 Based on the revised Act on

Special Measures against Pandemic Influenza, which was established on March 13, 2020 (Friday), Prime Minister Shinzo Abe issued an ' Emergency Declaration ' at 17:43 on April 7, 2020 (Tuesday). Announced. This is the first declaration based on the law. The target is 7 prefectures of Tokyo, Kanagawa prefecture, Saitama prefecture, Chiba prefecture, Osaka prefecture, Hyogo prefecture, and Fukuoka prefecture . The period is from April 8 (Wednesday) to May 6 (Wednesday) .

According to Prime Minister Abe at the time of the announcement, according to the expert's estimate, if contact can be reduced by at least 70% and 80% as much as possible, the number of infected people can be reduced in two weeks.

The “emergency declaration” strengthens the authority of prefectural governors, requests for restrictions on going out, school closures, restrictions on the use of large-scale facilities such as live houses and movie theaters, the use of land and buildings for the maintenance of medical facilities, You will be able to request the transfer of medicines and food products.

This 'emergency declaration' is different from the 'lockdown (city blockade)' that is performed in overseas cities to block transportation and stores and prohibit going out. It is clearly stated. Out-of-go refrain does not cover items necessary for maintaining a living, such as going to a medical institution, shopping for food, or going to work, and as a general rule, supermarkets will continue to operate. There is no big change from the refraining from living, and he said, 'There is no need to stock up.'

Regarding the restrictions on the use of large-scale facilities and the transfer of medicines and food products, if the business operator does not respond to the request without a valid reason, it is possible to issue a 'instruction' stronger than the 'request'. There are no penalties, but if you do not follow the instructions, the name of the business will be disclosed, which will be a de facto pressure.

In issuing the 'Emergency Declaration', there are two requirements: 'Danger of serious damage to the lives and health of the people' and 'Danger of serious damage to the lives of people and the economy due to the rapid and widespread nationwide spread'. there is. The Advisory Committee on Basic Coping Policies by Experts, which was held in the morning of April 7 (Tuesday), judged that this case satisfied the requirements, and accepted the policy of issuing the emergency declaration. As of April 3 (Friday), Prime Minister Abe had the view that 'the nationwide and rapid spread has not been reached.'

Mayor Ichiro Matsui of Osaka City announced that he would respond to the 'emergency mode' at the ' meeting on the status of examination of the emergency situation ' held by Prime Minister Abe on Monday, April 6th. We decided to cancel the entrance ceremony for Osaka City Elementary and Junior High School, which was scheduled for the day, and postpone the opening ceremony on the 8th.

Notice ❗️ Today's Prime Minister Abe's press conference is a declaration of a real emergency. Officially, after the administrative procedure, an emergency declaration will be issued tomorrow afternoon, but Osaka City will respond to the emergency mode at today's Prime Minister Abe's interview. Tomorrow's entrance ceremony at Osaka Municipal Elementary and Junior High School will be canceled. The opening ceremony on the 8th will be postponed.

Governor Hiromura Yoshimura of Osaka Prefecture has also decided to postpone the entrance ceremony of prefectural high schools and support schools. We also request similar measures from the municipal board of education and private school in Osaka.

After discussing with the Office of Education, we decided to postpone the entrance ceremony, etc. for prefectural high schools and support schools after April 8th. In addition, we decided not to carry out temporary school days once or twice a week scheduled for April 8 or later during the period of the emergency declaration for the time being. We request the municipal board of education and private school to do the same.

Addendum:
'Public Notice on Emergency Correspondence of New Coronavirus Infectious Diseases' was published in the special issue (No. 44) of the official gazette dated April 7, 2019.