It turns out that the `` fixed '' vulnerability of Intel CPUs was actually unfixable, allowing privileged code execution and avoiding DRM etc. Many vulnerabilities have been found in Intel CPUs in recent years, including '

Meltdown ' and ' Specter ' in 2018, and ' SPOILER ' in 2019. As one of such vulnerabilities, it turns out that the `` already distributed patch '' vulnerability found in the Intel CPU security system `` Intel CSME '' is actually completely unfixable Did. Exploiting this vulnerability could allow malicious code to run at a privileged level, and could also circumvent the DRM copyright protection technology. Intel CSME operates at the initial stage of booting a computer, plays a central role in encryption functions based on Intel products such as

UEFI , BIOS , BitLocker of Windows, etc., and identifies individual computers such as DRM and TPM Is a security system that is also used.

In May 2019, Intel released a firmware patch ' INTEL-SA-00213 ' that fixes a vulnerability ' CVE-2019-0090 ' related to Intel CSME. At the time, it was described as a vulnerability that allowed privileged code to be executed only if the CPU had physical access. This patch can prevent attacks on Intel CSME via ISH which processes external input. 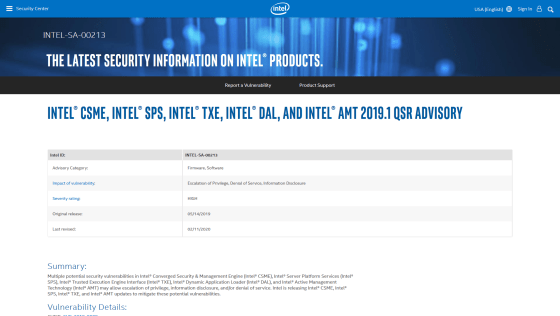 However, a research by security company Positive Technologies researchers found that Intel CSME was not protected on boot ROM at startup. Even without going through the ISH, it was found that when reading the boot ROM, malicious code could be executed, DRM could be avoided, and input from the USB keyboard could be obtained illegally.

Affected by this vulnerability are all CPUs sold in the past five years from 2020, except Intel's 10th generation CPU. Positive Technologies researchers say that CPUs need to be replaced to completely fix the vulnerability.