It is difficult for companies to survive for many years in response to the rapidly changing social and economic trends. In Japan, the average company life is said to be

about 20 years . Among such, the United Kingdom of small business loans and business bank towards, 'is to disseminate information about the credit option BusinessFinancing.co.uk ' is, summarizes the 'oldest companies existing in each country.' Infographic publish Did.

The Oldest Company in Almost Every Country (That is Still in Business)-BusinessFinancing.co.uk
https://businessfinancing.co.uk/the-oldest-company-in-almost-every-country/

BusinessFinancing.co.uk looked at various sources on the Internet to find the oldest company in each country, and checked whether individual companies were still alive as of 2020. The list includes not only private companies but also state-owned companies, but companies that did not know the exact information and were not confident were not included in the map, and those countries where the oldest company could not be found were blank. You. 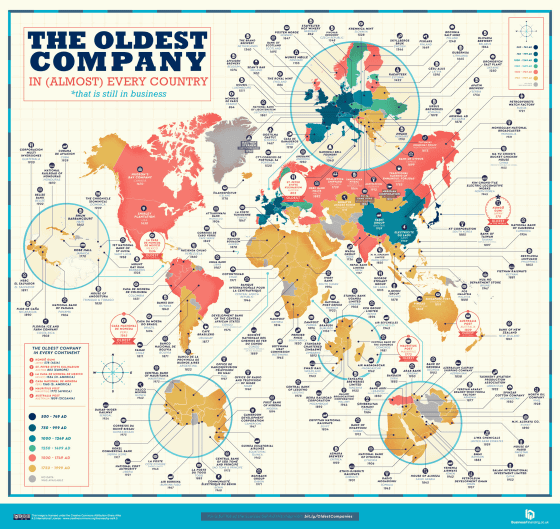 ◆ 1: Europe
The following map shows the oldest existing companies in Europe by country. The oldest company in Europe is the restaurant “

Stiftskeller St. Peter ”, founded in 803, next to the St. Peter's Abbey Church in Austria. In Germany, a neighboring country, there is the oldest winery in the world called ' Staffelter Hof ', founded in 862. In addition, companies that have been around for a long time are not limited to eating and drinking. The

Paris Mint was established in 864. The Kremnica Mint in Kremnica , Slovakia was founded in 1328 under the control of the Hungarian Kingdom. ◆ 2: North America continent
The oldest existing company on the North American continent is the Mexican Mint , founded in 1534 in Mexico . The oldest surviving company in the United States is

Shirley Plantation , founded in 1638. After more than 380 years, the descendants of the founder continue to manage the land and operate the farm. A part of the farm is open to the public, and the old buildings are said to retain the Queen Anne style architecture , which is rare in North America. The Columbia Mint is a museum founded in 1621 in Bogota , the capital of Colombia. Also, the Brazilian Mint was founded in 1694, and before that it brought its own currency to Brazil where currency brought from abroad was circulating. ◆ 4: Asia
In Asia, there is only one dark blue color that indicates 'Founded 500 to before 749' throughout the map. The Kongo Gumi was founded in 578 by a Japanese carpenter, Kongo Shigemitsu, who was invited to Japan from Baekje in the western part of the Korean Peninsula to build Shitennoji . It is the oldest company existing in Japan and the oldest company existing in the world. After the business crisis, in 2006, Takamatsu Construction invested as the new Kongo Gumi, taking over all of its technology and employees and restarting. In China, Ma Yu Xingyue Chicken , founded in 1153 during the Golden Age, the royal dynasty, is the oldest surviving company. 'Okeko chicken' is a chicken dish that uses a seasoning called 'bushimizu'. ◆ 5: Africa
In Africa, all companies have been in business since 1750, and nearly half of the 10 oldest companies are post offices. BusinessFinancing.co.uk explains in this regard, 'Huge continents needed a solid postal service.' The oldest company in Africa is the

Mauritius Post Office , founded in 1772 in Mauritius in the Indian Ocean. Initially, I understand that business has been run by only 8 people postal worker, even after you're postal system in African countries, in 1814 Namibia even Namibia Post Office (NamPost) was founded. Also, a food company called Premier FMCG was founded in South Africa in 1820, and it has many brands even at the time of article creation. ◆ 6 ： Oceania
The oldest company in Oceania is the

Australian Postal Service , founded in 1809. The postal service is said to have started with the appointment of former prisoner and prisoner Isaac Nichols as postmaster, and at the time of writing the article was almost monopolizing Australia's postal service. The table below lists the top 10 oldest companies that have survived even at the time of article creation. Excluding those mentioned in the article, the

Royal Mint was founded in England in 886, Sean's Bar in Ireland, known as the `` oldest pub in the world ' ' in 900, and the Bell Foundry in Italy, founded in 1040 Pontificia Fonderia Marinelli , Afrigem Brewery , founded in Belgium in 1074, and Munke Mølle , founded in 1135, a Danish flour and bread factory, were among the top rankings . 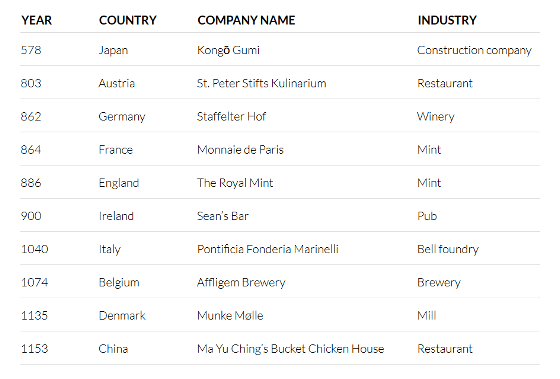