Go, a cash-free convenience store that has been deployed since 2018, plans to increase the number of stores to 3000 by 2021, and to introduce its cashless payment system at airports and movie theaters It is reported that it is being considered. In addition, at the end of 2018, it was reported that cashless payment systems that do not require cash registers could be operated at large supermarkets, but this was finally realized, and the cashless supermarket ' Amazon Go Grocery ' was born.

Amazon is the world's first cashless supermarket that introduced a cashless payment system that is already operated by Amazon Go, in order to eliminate the appearance of shoppers forming a line in front of cashiers often seen in supermarkets Has been opened. Amazon's cashless supermarket has just opened on Tuesday, February 25, 2020 in Seattle, the US home of Amazon.

When entering a supermarket, shoppers need to launch a special app on their smartphone and hold it over a device such as a ticket gate at a station. The store has a number of cameras and sensors that track the items that shoppers take from the shelves and bill their Amazon accounts for the items they bring back when they leave. 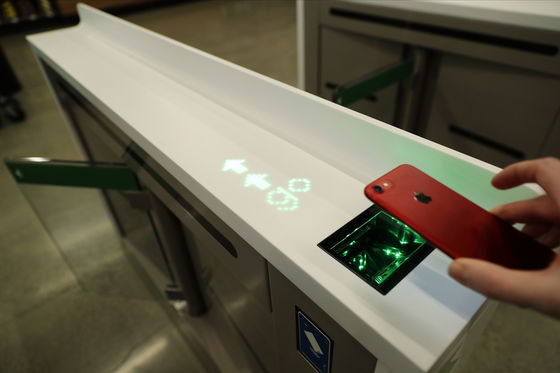 The official name of Amazon's cashless supermarket is 'Amazon Go Grocery', and its first memorable store has a land area of 10,400 square feet (about 970 square meters), more than five times that of Amazon Go. acquired Whole Foods , a luxury supermarket in 2017, and has since expanded its online grocery delivery service, Amazon Fresh . However, it is still lagging behind Wal-Mart, the country's largest grocery store with more than 4,700 stores in the United States. Since the US food market is as large as $ 800 billion (about 88 trillion yen), Amazon's services such as Amazon Fresh, Amazon Go, Amazon Go Grocery participate in the company's food market in earnest It is nothing but an expression of the will to do so.

In addition, Amazon plans to open a different type of grocery store in Los Angeles in 2020 from Amazon Go Grocery, and according to the company, there is no plan to introduce a cashless payment system like Amazon Go at this store. Amazon hasn't commented on plans to increase the number of Amazon Go Grocery stores, and says it has no plans to introduce a cashless payment system at Whole Foods, which it acquired.

Many of the fruits and vegetables handled by Amazon Go Grocery are purchased from the same supplier as Whole Foods. Some Whole Foods brand products are sold, such as organic oatmeal and bagged carrots, and some are not available at Whole Foods. In addition, Amazon Go Grocery does not have a deli counter, butcher / fish shop, etc., so only cut meat and fish fillets are displayed in a refrigerated shelf in a packed state. Since no cash register is required, the only employee who works at Amazon Go Grocery is the person who replenishes shelves with products. Amazon Go Grocery is a cashless supermarket, so families can shop with one smartphone. However, if the person who joined the store returns with the product when the store exits, the Amazon account used when entering the store will be charged.

Some point out that cashless payment systems discriminate against low-income earners who do not have a credit card or bank account. In response to this indication, Amazon also supports cash payment with Amazon Go, and cash settlement is also possible with Amazon Go Grocery.