A photographer who sold a camera on Amazon 'lost both the camera body and the price of 300,000 yen' 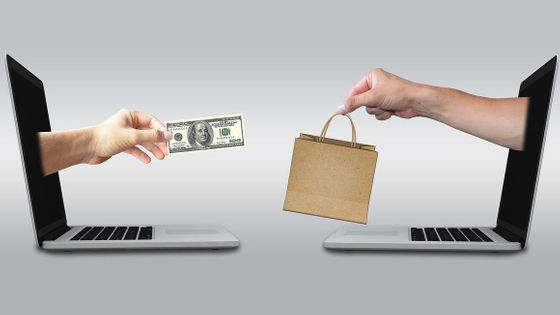 A photographer who sold a used camera through Amazon refunded the purchase price in response to a return request from the purchaser, but the camera itself was not returned and Amazon refused the warranty, so 'I lose both the camera and the price. I am complaining that I was hit by the situation.

Amazon Let a Fraudster Keep My Sony a7R IV and Refunded Him $ 2,900

The victim of the scam on the Amazon marketplace was Cliff Redeker , an amateur photographer. Mr. Redeker owned a Sony digital single-lens camera ' α7R IV ' as a spare camera, but he decided to let go because he thought it would be better to rent a spare camera. I put the 'α7R IV' at a price of $ 2905.99 (about 320,000 yen) and put it up for sale on Amazon, and the order came in immediately.

Mr. Redeker was a little worried that the purchaser's name was not his full name but his initials, but he immediately packed it up and shipped it with FedEx's insured courier service. The transaction was successful until it arrived at the buyer on December 17, 2019. However, on December 24th, a week after arrival, the purchaser will receive a complaint from the purchaser to Mr. Redeker via Amazon that there are 'missing parts'.

In an email sent to Mr. Redeker from Amazon, he commented, 'I didn't have the parts for the product I should have purchased. I'm angry because it was an order for Christmas. I don't have time to replace it anymore.' It was written. 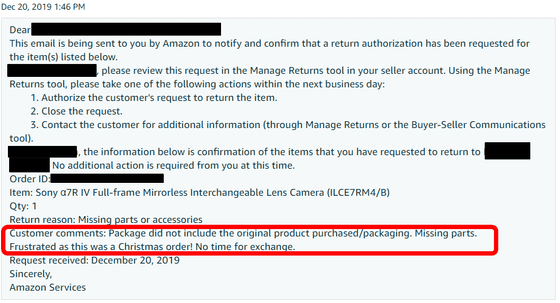 Amazon rejected the 'Amazon Marketplace Guarantee ' application from the buyer, perhaps because the 'proof photo of the unopened package' that Mr. Redeker sent to Amazon was successful. Amazon Marketplace Guarantee is a mechanism to protect buyers from inappropriate transactions on the marketplace, and buyers request a refund if an order does not arrive or if something different from the ordered item arrives. It is a system that can be done. 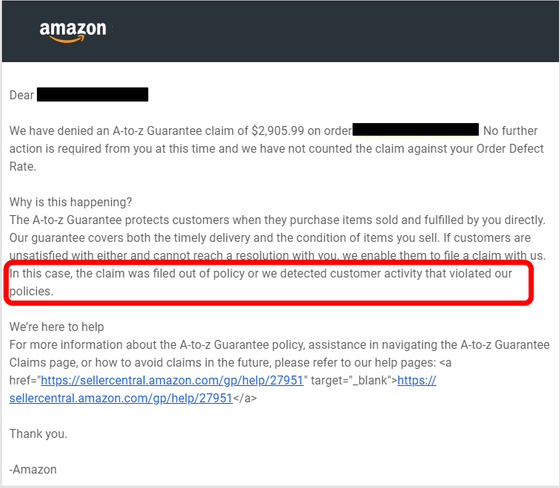 However, Amazon suddenly decided to accept the return request. Turning from the initial decision, he reported to Mr. Redeker that he would refund the price to the purchaser, saying, 'We have determined that the item received by the purchaser was different from the description at the time of sale or there was a problem.' Mr. Redeker immediately complained to Amazon about this, but please note that Amazon's reply says, 'You can contact the buyer to arrange a return, but you are not required to return it. Was written. In other words, if you apply for a refund through the Amazon Marketplace Guarantee, the buyer will need to return the item, but Amazon will not confirm that it was returned correctly, so 'get the item while receiving the refunded price'. There is a loophole that makes it possible.

'This is the worst case, and I hope this doesn't happen to anyone else,' said Redeker, who is currently emailing buyers to return the item. The mechanism needs a fairer fail-safe, 'he said, recommending to anyone looking to sell their cameras in the future:

・ Consider methods other than Amazon, such as eBay , an auction site, and Fred Miranda , a platform specializing in cameras.
・ When selling on Amazon, record the state of packing the camera in a video.
・ If you need a spare camera, consider renting it rather than buying it.
・ When you have the camera at hand, use the smartphone app MyGearVault to manage the serial number of the camera.

In addition, although eBay is recommended by Mr. Redeker as an alternative to Amazon, there is also a comment in Mr. Redeker's article that 'eBay is the same as Amazon and does not protect the seller', and the seller's self-defense The difficulty of is highlighted.