What is an animal that does not move for 7 years and mates only once every 12 years? The lizard ' Horimori, ' a 20-30cm long white lizard that has been dubbed the 'baby dragon' from the folklore of being a dragon infant, is said to have sharp hearing and smell, degenerate eyes, and live up to 100 years. Is a Croatian natural monument. The results of long-term studies of such horaimori have revealed a surprising ecology that they have not moved at all for more than seven years. Horaimori is an amphibian that looks like a white snake and is the only vertebrate cave creature inhabiting Europe. Adapted to dark caves, there is little pigment and the eyes are covered with skin. Instead, the senses other than vision are sharp, they can sense underwater organic matter with a better sense of smell than other amphibians, audible that can accurately identify the direction of sound in water, and `` electroreceptors '' that can detect weak geomagnetism I also have an organ called.

The research group of Gergely Balázs and others, an ethnologist at the University of Eötvös-Lorand in Hungary, shed light on the holy life history of Horaimori. The research group investigated the behavior of 19 adult horaimori living in a cave in Trebinje , Bosnia and Herzegovina, between 2010 and 2018. Using a research method called the tag recapture method , in which each individual is tagged and periodically observed, the amount of movement of each hori newt was measured. 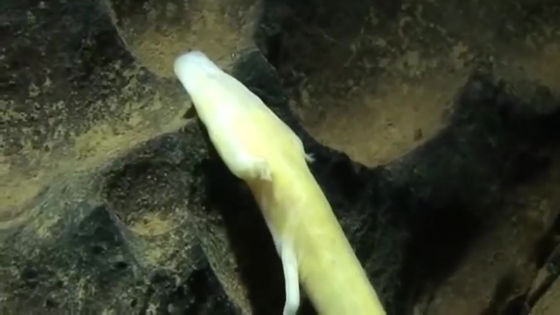 As a result of a total of 37 observations, only three individuals moved 20m or more in total, and most did not move 10m. In addition, the most immobile individuals were observed at the same location for 2569 days. Balázs said about Horaimori, 'They are doing nothing, just standing there.'

The reason why Horaimori doesn't move so much is the special environment of caves and the nature of being resistant to hunger. Because there are no predators, there is no need to escape or hide, and you can live without eating for up to 10 years, so it is only at the time of mating that you need to move actively. The average mating is about once every 12.5 years, so it can happen that it doesn't move for seven years. 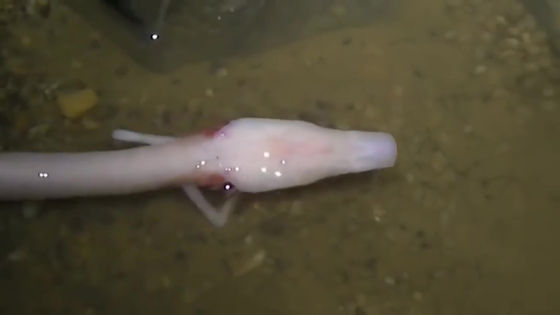 British zoologist David Attenborough said, interview of The Guardian for 'the OLM, very has sent a slow pace of life, which is also the secret of its longevity. We also, there will be a place to learn in the way of life.' I said.