A huge Evangelion first machine with a total height of 2 meters appears at the One Fest venue, and it can be ordered with completely made-to-order production Since its airing in 1995, Neon Genesis Evangelion has long been popular. From 2007, a remake of the movie 'Evangelion New Theatrical Version' will be released, and in June 2020 the final version of 'Shin Evangelion Movie Version: ||' will be released The first machine appeared at the venue of

An extraordinary presence comes from the Evangelion booth. The huge first Evangelion was on display. As you get closer you can really feel the size. This huge first machine is

orderable . The price is 1.58 million yen by tax and it is completely made to order. The size is large and the power of the face is perfect. The first machine of 88cm size was also exhibited at the same booth. The weight is about 10kg, and the material is glass fiber + SLA + poly resin + magnet. Like the 2m size one, the prototype production is Shinobu Matsumura, planning, manufacturing and sales are Gomora Kick, and the sales agency is Kaiyodo. The price is 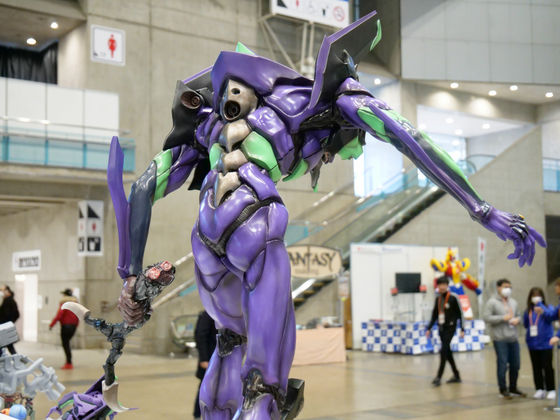 The feeling is likely to be paralyzed because I saw the huge version first, but if you think calmly, it is very large even at 88 cm size.

In addition, even if you have never seen Evangelion, the official has prepared a summary movie that can review all three of the new movie version so far in about 5 minutes each, about 15 minutes in total, If you check only this, you can enjoy the final version of 'Shin Evangelion Movie Version: ||'.


In addition, on February 9, 2020, episodes 1 and 2 of TV animation are released free of charge, and a digest movie that has been compiled in three minutes with three new theatrical versions prepared by director Hideaki Anno has been prepared. 'Is the new theater version finally completed ...?'