Complete nutritional food `` All-in PASTA '' packed with all the nutrients necessary for people in noodles has dramatically changed, so I tried it 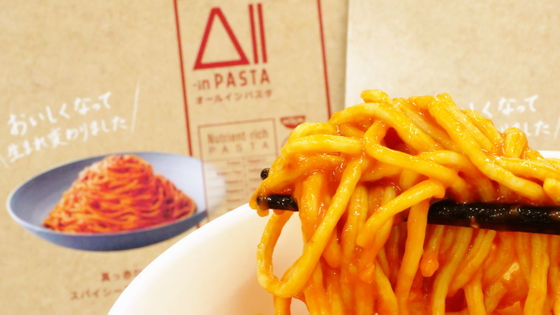 All-in PASTA, a complete nutritional food from Nissin Foods that makes it easy to get the nutrition you need for a day, has been renewed since December 16, 2019. The cup-type “All-in PASTA”, where you can enjoy pasta just by pouring hot water, was worried about the texture and the taste of kelp when you

reviewed it before. It is said that it is close to the taste of. When I actually compared it, it was a drastic change that once I had eaten after renewal, I couldn't eat it before renewal.

This time, we have renewed three types of sauces: “ All-in PASTA Spicy Tomato Spicy Arabica ”, “ Thick Bolognese with the Flavor of Coarse Beef ”, and “ Genoze with Basil Fragrance ”. First of all, I will try 'Spicy Tomato Spicy Arabica'. The left is after renewal and the right is before renewal. 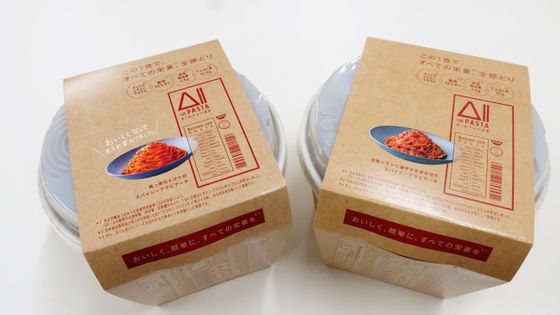 Calories are 451kcal per 203g per meal after renewal and 479kcal per 223g per meal before renewal. The calorie is slightly less after the renewal, probably because the content is reduced by 20g. In terms of nutrition, vitamin B1 has been increased from 3.75 mg to 6.90 mg, while vitamin C has been reduced from 291 mg to 283 mg. In addition, all said that 'a third of the vitamins and minerals required by men aged 30 to 49 years a day' is included.

Looking at the raw materials column, the renewed sauce clearly states that tomatoes are made in Italy, and the noodles before renewal are written `` vegetable protein '' first, whereas after the renewal `` wheat flour '' Is the top. In addition, the content has decreased from 223g to 203g, but the noodles are deferred to 80g, so the reduced 20g is for the sauce.

When I opened the cup, there was a bag of noodles and a bag of sauce in both. 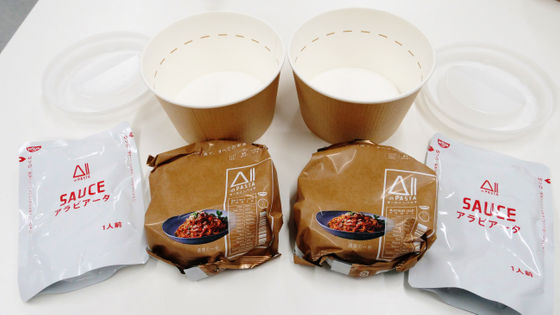 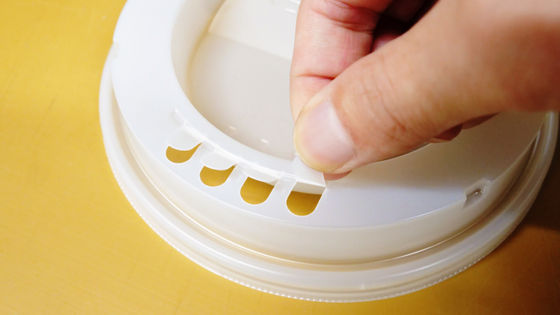 After putting noodles in the cup, pour hot water and wait for 6 minutes. In addition, since the bag containing noodles also contains a sachet of “Hogushi Oil”, it is necessary to be careful not to put the sachet in the cup with the noodles or throw away the bag after taking out the noodles . 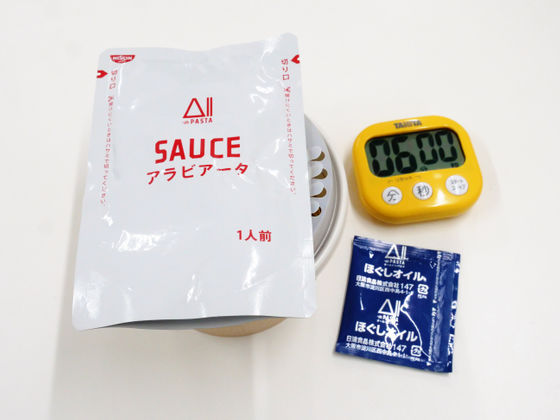 When the timer sounds, hold the lid with both hands and drain the hot water. 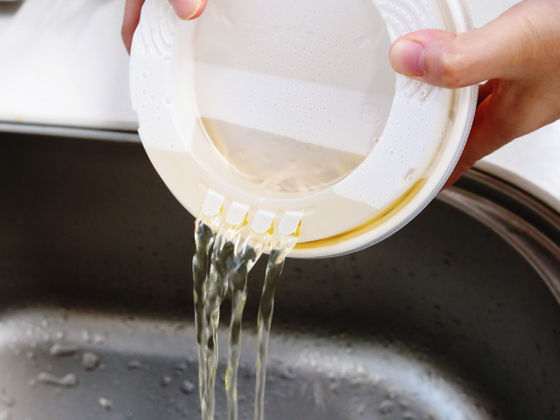 When the hot water draining is over, add 'Hagushi Oil' and mix well. 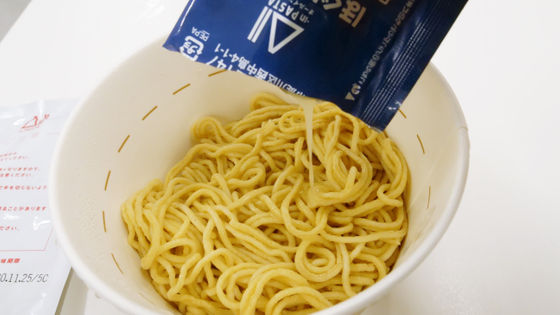 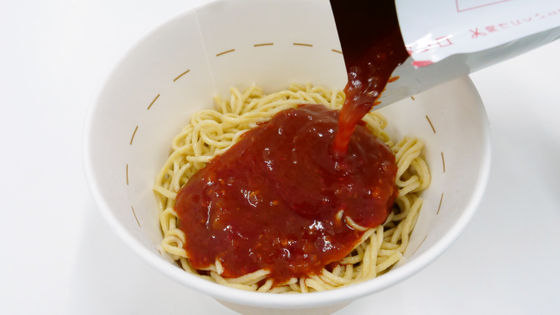 Mix well and you are done. This is the 'Spicy Arabica' before renewal made at the same time. Compared with the renewal, the source is more reddish. Next, when you eat the new 'Red Spicy Tomato Spicy Arabica', you will notice that the flavor of the kelp has completely disappeared. Since the texture of the noodles remains unsatisfactory, there are places that are a little unsatisfactory for

Ardente lovers, but since the noodle flavor has improved dramatically, pasta made with ordinary noodles and commercially available sauces A taste that is not inferior even when compared. The sauce also increased slightly in viscosity and became easier to entangle with the noodles, so there was no impression that it decreased, but rather the refreshing acidity and tanginess of the tomatoes were felt. Next, let's eat 'rich bolognese full of the taste of coarsely ground beef'. 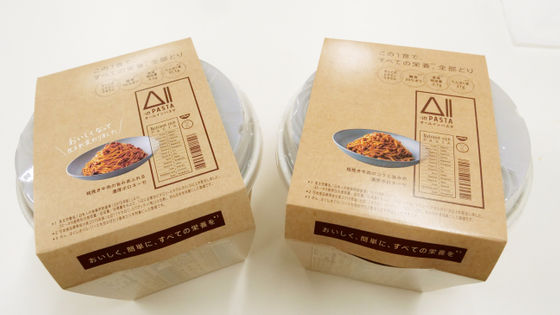 Both contents are the same 223g, but the calorie is 498kcal after renewal and 487kcal before renewal. In terms of nutrition, vitamin B was greatly strengthened, while some nutrients such as vitamin A and vitamin C were reduced, as in the case of the arabita we ate before.

Looking at the raw materials, we found that “cheese food” that was not included before the renewal was added to the sauce after the renewal. Before renewal, “beef” was first listed as a source ingredient, whereas after renewal “tomato paste” and “onion” were listed before “beef”. The salt equivalent is 2.7g before renewal, but after renewal it is 4.5g, increasing by 1.8g.

So, this is the “rich bolognese full of the taste of coarse ground beef” after the renewal made in the same procedure as Arabica. The Bolognese before renewal made at the same time has a slightly lighter color than the one after renewal. First of all, let's eat before renewal. The sauce has the taste of minced meat on the front, but the flavor of noodles has a tail as a aftertaste, so I was a little worried about the smell of kelp remaining. 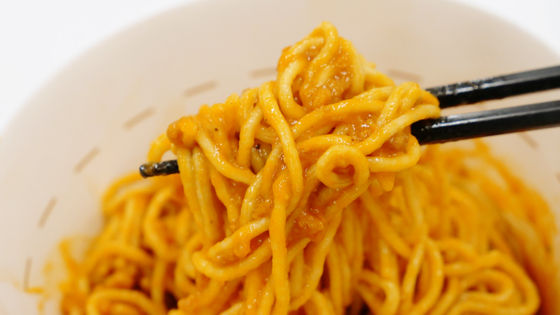 Next, after eating the renewal, it was clear that not only the flavor of the noodles was fraught, but the flavor of the sauce was improved in each stage. The deliciousness of vegetables from tomatoes and onions enhances the taste of the meat, while the richness of the cheese deepens the taste. Although it seems a little salty, it was a dish that made the difference between some of the editorial staff who tasted, saying that once you ate after renewal, you can't eat it before renewal! 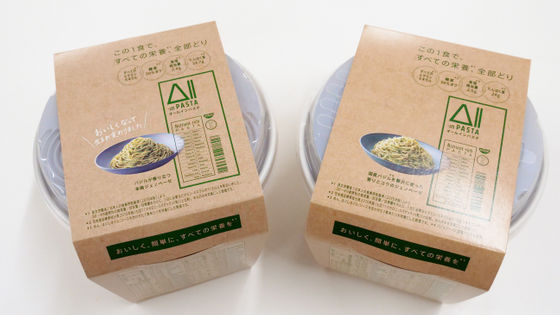 The cup of “Genoze with a fragrant basil” contains not only a noodle bag and sauce, but also a bag of “basil parsley”. This was actually made. Comparing the left renewal with the right renewal, there is almost no difference. First of all, if you try to eat it before renewal, the flavor of the noodles will be felt straight because the source claims are not so strong, and it will be quite difficult to eat. The flavor of the sauce is a bit harsh, and it's a little harsh, but I feel like I'm eating hay. 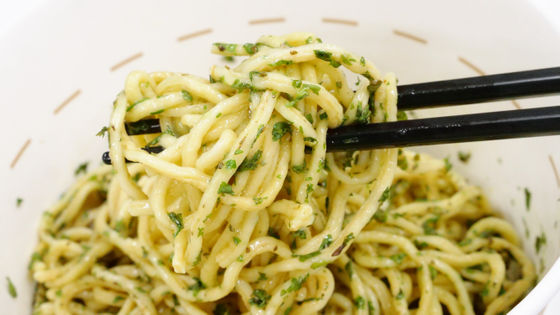 On the other hand, after the renewal, Authentic Genovese with Basil Fragrance has dramatically improved the flavor of noodles, and thanks to the ease of entanglement of the sauce, you can fully enjoy the scent of both basil and parsley. Possible. I was able to feel the flavor of herbs with accents like perilla. “All-in Pasta” can be purchased from the

official online store of Nissin Foods. If you bought 'All-in Pasta' in an online store before, it was said that you can use a 500 yen discount coupon. Also, those who have never bought 'All-in Pasta' will be discounted by 300 yen with the coupon code ' tabetemite ', but the expiration date of the coupon code is December 16, 2019-2020 Since it is only until January 31, it is recommended that those who are interested should check early.