`` Mars' ice is also present just below the surface and can be excavated with a shovel, '' a NASA researcher reports A NASA researcher announced the results of an analysis of the ice near the surface of Mars, arguing that `` Mars' ice is just below the surface and can be excavated with a shovel. '' did. 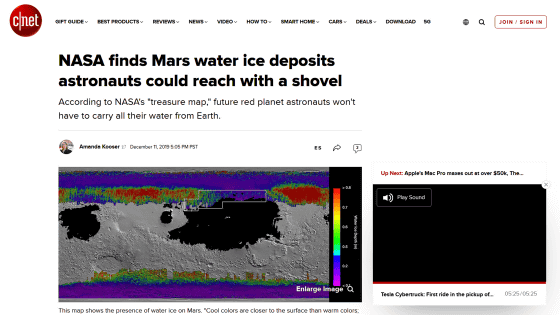 Water is indispensable for human survival and spacecraft fuel, but because it is heavy and has a large volume, it is particularly difficult to transport very long distances from Earth to Mars. Therefore, researchers aiming at space development are considering the idea of “using the ice on Mars”.

The fact that `` Mars has ice '' can be confirmed by

excavation survey of the Mars surface by the probe launched in 2008, Phoenix , and high-resolution photographs of the ground surface exposed by the Mars probe It is. Sylvain Piqueux , a researcher at NASA's Jet Propulsion Laboratory , has created a new 'map showing the location of ice beneath Mars'. 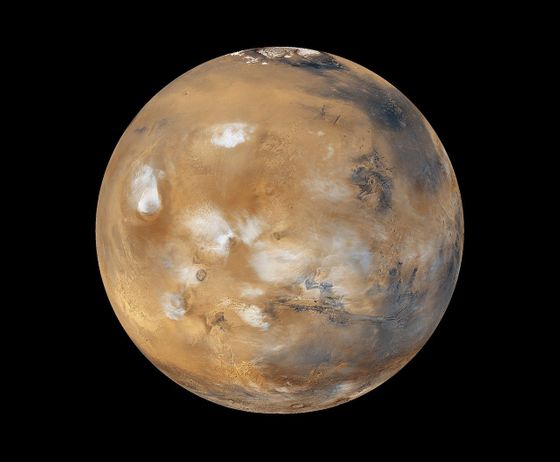 Because Mars' atmosphere is thin, it is thought that when water or ice touches the atmosphere, it easily evaporates due to atmospheric pressure. For this reason, much of Mars' water and ice are believed to be underground. Identifying where the ice is on Mars in advance is an important point in selecting a landing site for the spacecraft.

Because ice buried underground affects the surface temperature of Mars, Mr. Piqueux has been working with Mars Climate Sounder (Mars Climate Sounder) , a Mars Revolution Renaissance orbiter, NASA's Mars Orbiter , and the 2001 Mars Odyssey. Analyzes data collected by heat-sensitive devices such as Thermal Emission Imaging System . Furthermore, these data were cross-referenced with radar observation data and ice reservoir data observed after meteor impact, and the location and depth of ice were mapped.

The “location and depth map of the ice below Mars” created by Piqueux ’s research team is as follows. If the color on the map is cold blue or purple, there is ice at a depth of less than 30 cm from the surface, and the warm colors of yellow and orange indicate that the ice is at a depth of 60 cm or more. As expected, it can be seen that ice is concentrated in the mid-latitude and high-latitude regions close to the polar regions, and in some areas, including the Arcadia Plain , it appears that ice exists only a few centimeters from the surface. The black area represents the surface suitable for landing on a spacecraft. Based on this information, the part surrounded by the white line is said to be an “ideal place for dispatching astronauts in particular”.

'You don't need a drilling machine like a backhoe to dig this ice, you can dig ice with a shovel,' Piqueux said. In the future, Mr. Piqueux will continue to investigate and work on issues such as whether the abundance of ice buried in the season will change.