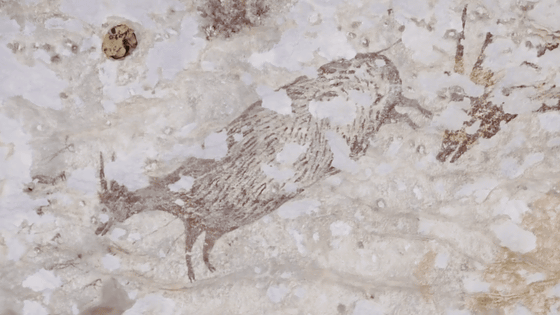 A research team has announced that 'the hunters of half and half beasts' have been drawn about the oldest animal murals found in Indonesia.

A joint research team of Griffith University in Australia, National Archaeological Center of Indonesia , and Makassar Cultural Heritage Bureau conducted a survey using the uranium-thorium method , a radiometric dating method , and found it on Sulawesi Island, Borneo, Indonesia The mural in question was found to have been drawn at least 40,000 years ago. In November 2018, the research team announced that the mural in question was “the oldest animal painting of humanity”.

Survey result that the animal picture drawn before about 52,000 years old, the oldest of mankind, was in a cave on Borneo Island, Indonesia-GIGAZINE 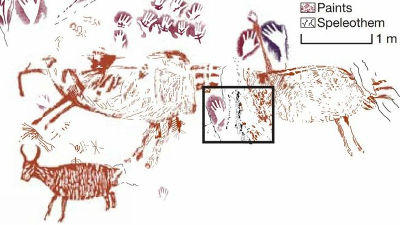 The research team continued research after this announcement. This time, the research team announced that the murals in question were drawn before 43,900, not 40,000. In addition, this mural showed the view that the torso had humans, the head had birds, reptiles, and a tail, and “ a creature that fuses humans and animals ”. The mural of a person with a bird's head released by Griffith University is shown below. This is a mural of a person with a tail. The following images are digitally colored murals that are easy to understand. The mural shows the hunters of half and half beasts chasing cattle and wild boars that are endemic to Sulawesi Island with a spear and rope. Regarding the mural painting, the research team says, 'It may be the oldest evidence in the world that shows the human ability to come up with something that does not exist in nature, which is the foundation of modern religion.' Prof. Maxim Ober, who led the research team, said, “The murals in question include figurative art like a half-human and half-beast, and a picture like a scene from a story. Was the main component of Sulawesi, 44,000 years ago. '

According to Griffith University, many murals have been discovered in the suburbs of Sulawesi, but many of them are disappearing because the walls of the cave have peeled off.