'Keep Your Hands Off Eizouken!' A video drawn by the original author, Sumito Owara, also appeared in the third PV. The Tatami Galaxy ', ' ping-pong THE ANIMATION ', ' evening Mijikashi Arukeyo Maiden ,' ' Dawn tells song of Lou has worked on, such as' Masaaki Yuasa 5 years of the TV series 'of supervision Do not take out a hand to the video Research The third PV of ' ! ' Has been released. Already, it has been transmitted from the 1st and 2nd PV that it is a work that reproduces the original quite a bit, but in the 3rd bullet, the voice of the character finally entered, and the image of the work can be perfectly grasped. The belief is that 'setting is the key to anime' I have a lot of imagination, and I'm writing anime settings in a sketchbook, but I'm not good at socializing, so I couldn't put that into shape. One thing I met with Asakusa was Swallow Mizusaki (voice:

Misato Matsuoka ), who is famous in the school as a charismatic reader model. In fact, I am an animator and am good at drawing the movements of characters. When the character of Mizusaki and the setting of Asakusa are combined, there is one light. Sakaka Kanamori, who is a friend of Asakusa and is sensitive to the smell of gold (voice: The scheme begins to move. Kanamori & Mizusaki not in uniform 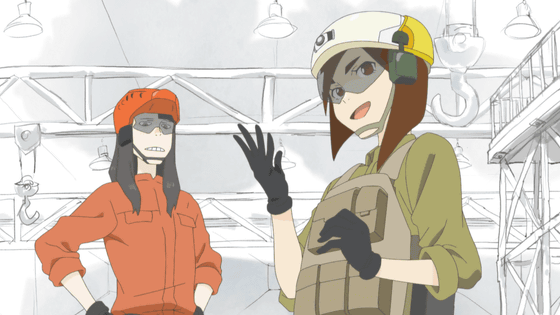 Please check the PV video to see why three people are supposed to board the cockpit. Asakusa, the staff roll that flows in the second half of the PV, was drawn by the original author, Sumito Owara. Daido also works on the ending of the main story.

This is the first video of my eagle. pic.twitter.com/jtv3EkjirU

Like the characters of the three daughters, the people inside seem to have a lot of fun. It seems to symbolize the atmosphere of the work.

'Don't mess with the Video Lab!' Will start broadcasting on NHK synthesis at midnight on Sunday, January 5, 2020. At FOD, the latest episode will be delivered exclusively from 26:00 on Sunday.
© ︎2020 Sumito Daido / Shogakukan / 'Iken Lab' Production Committee