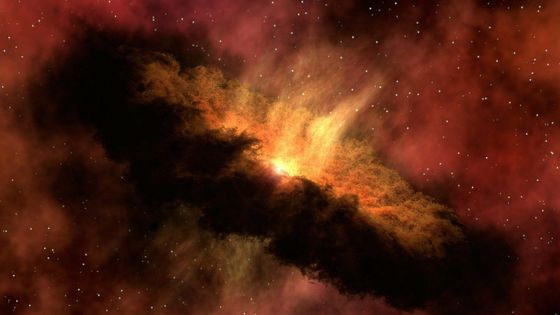 Since the universe was born about 13 billion years ago, it is said that it has continued to expand. In recent years, the `` flat universe '' theory that the expansion of the universe will not shrink in the future is thought to be powerful by scientists, but the research team that analyzed the new data, `` the universe is flat Rather, a theory that 'it is likely to be a closed universe' was announced.

Planck evidence for a closed Universe and a possible crisis for cosmology | Nature Astronomy
https://www.nature.com/articles/s41550-019-0906-9

Everything We Know About the Shape of the Universe Might Be Wrong | Live Science
https://www.livescience.com/universe-may-be-curved.html 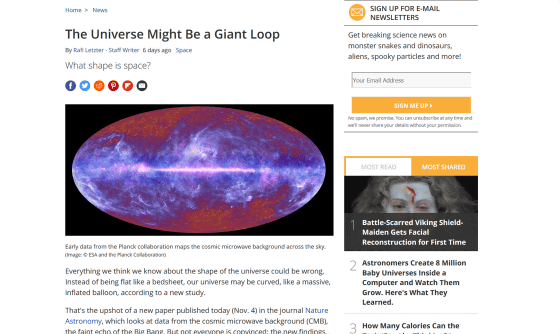 Various theories have been proposed as to whether the universe, which has been expanding since the

Big Bang, will continue to expand, or will eventually contract. Regarding the expansion pattern of the universe, there are three cosmic patterns: “closed universe”, “flat universe”, and “open universe” based on the idea of the “curvature of the universe” that indicates the bending of spacetime.

This is an easy-to-understand illustration of the differences on the website of the National Science Museum, which explains the open and closed universes. In the open universe, the universe gradually expands from the big bang at the left end, but in a closed universe, when it exceeds a certain level, it begins to contract and eventually reaches the end of the universe called the big crunch . 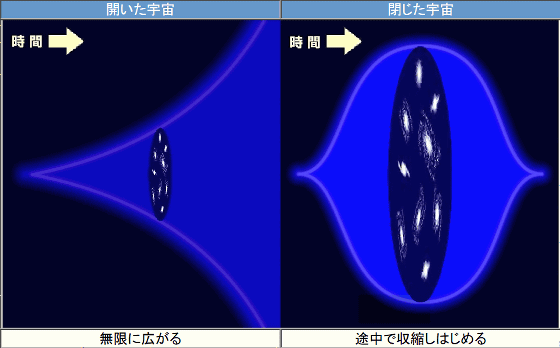 Although it is difficult to accurately measure the mass of the universe, scientists have regarded the theory that the universe is flat from recent observations. However,

Therefore, as a result of exploring a method to explain the extra gravitational lens effect, the research team found that it was possible to explain this phenomenon in a closed universe rather than a flat universe. “This can be explained by general relativity , so it is a physical interpretation rather than giving a new parameter (to explain an unknown phenomenon),” Melchiorri says.

Melchiorri admits that the theory published by his research team is not definitive because the results are not statistically reliable enough. He also explains that if the universe is not flat, many mechanisms related to the universe will need to be re-adjusted, causing many problems.

“I don't want to say that I believe in a closed universe. I'm a little more neutral. Let's wait for what the current data and the newer data show. 'We believe we need to be careful and try to find the cause of the contradiction,' Melchiorri said.