Associate professor of economics at George Mason University is the theory that the prohibition of close family marriage by Christianity has greatly changed the behavior and thinking of Catholics, especially in Western Europe, and increased individualistic thinking Advocated by Jonathan Schulz and others.

Schultz et al. Investigated the relationship between Christianity and kinship in Western Europe based on anthropology, psychology, and history. While loyalty increased, it turned out that the relationship of trust, equality, independence, and analytical thinking with other bloodless people tend to be impaired.

Schultz advocates that the Western Church, which bans close marriage, wiped out the nation and society built by close marriage. As a result, the increase in the number of nuclear families, moving people, and individualism, and the decline in family relations and collaboration led to the values that characterize Western Europe. Joseph Henrich, a professor of human evolutionary biology at Harvard University, argues that the change of the European family to a monogamous nuclear family from around 500 C.E. The

The graph below shows the relationship between a country that has been influenced by the church for a long time (horizontal axis) and the psychological scale of individualism (vertical axis). Blue dots and solid lines indicate western churches, green diamonds and dashed lines indicate countries where eastern churches have a strong influence. The triangle is a country where the influence of the Christian Church is small (Christianity has spread and has been under 30 years). 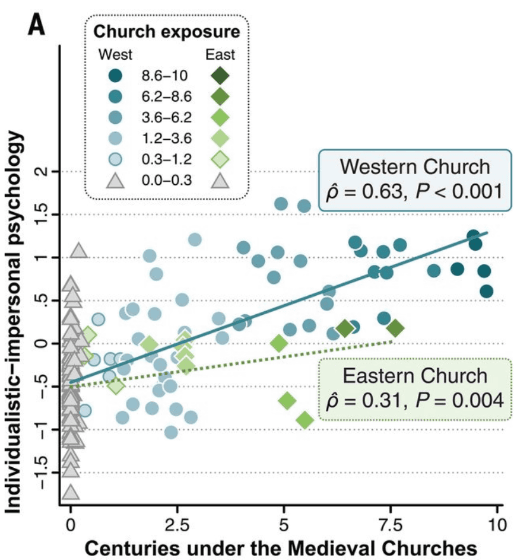 The following figure shows the Kinetic Strength Index (KII), which determines the strength of kinship based on the ethnic language groups and relatives of the world, polygamy, etc. 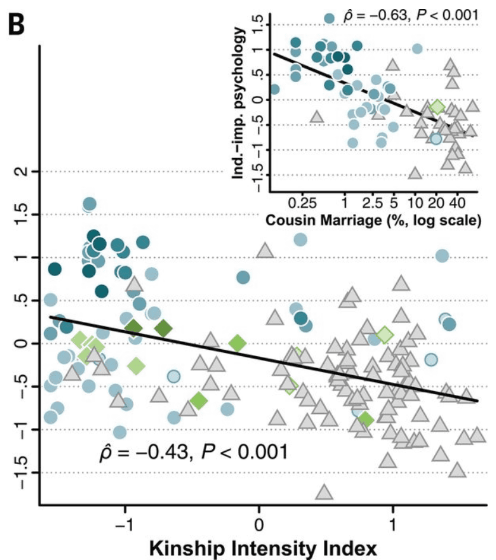 Looking at the graph showing the relationship between relatives (horizontal axis) and fairness (vertical axis), France is more fair and Turkey is lower. Spain, France, and Italy, where the influence of the Western Church is strong, tend to be individualistic and impartial, with low relatives, coherence, and obedience, and the values shown by France are particularly remarkable. In contrast, Turkey, which has a strong influence from the Eastern Church, has a high relative marriage rate and low individualism, which is the opposite of France.

Mr. Schulz also states that 'prohibiting close marriage may have encouraged Christian growth.' I suppose that the ban on close marriage led to the elimination of customs and beliefs shared by each relative, which made it easier for people to convert.

On Schultz's study of Christian psychological changes in Western Europe, Thomas Tarhelm, associate professor of behavioral science at the University of Chicago, said, “Because few people focused on Christians and the nuclear family, It ’s an interdisciplinary study. ” However, the theory of human culture has regional exceptions and unique cases, so we anticipate that some will oppose the relationship between close marriage and individualism. “Some researchers are deeply wary of the generalization of theory and theories of large scale, but that caution can overlook the usefulness of the theory and the consistency of discovery.” The