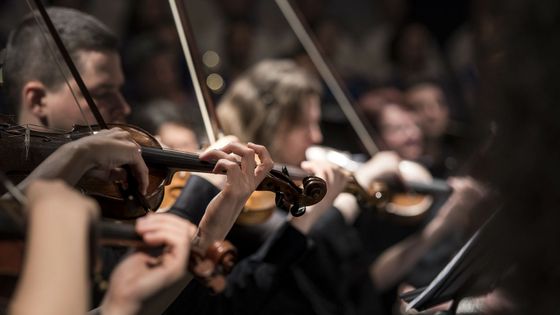 Announced in 2000, “I put a screen between the performers and the judges, and when I decided to join the orchestra after not knowing the gender of the performers, the pass rate for women increased by 50%.” Jonatan Pallesen, an active data scientist in Denmark, explains the paper as a “reliable study”.

The paper on issues relating to blind audition was published in 2000 in the American academic review, a monthly journal published by the American Economic Association. 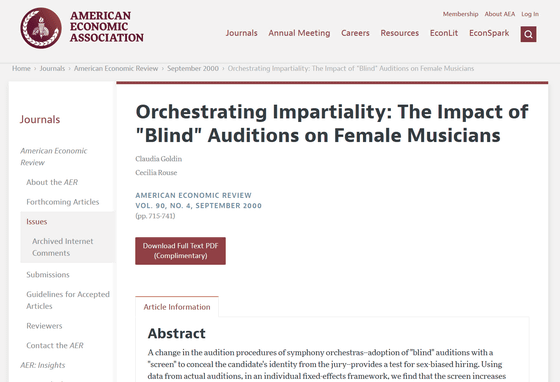 The number of citations of this paper on Google Scholar has exceeded 1,500, and it can be seen that it has had a great impact on the subsequent research. The impact was great not only in the academic world but also in the press, and major newspapers such as The Guardian, Times, and Forbes reported the paper extensively. However, Mr. Pallesen argues that the research conducted in this paper is quite sloppy and it is difficult to draw the conclusions reported by each paper. The results of an experiment comparing the blind and audition pass rates for men and women listed as “Table 4” in the paper are as follows. “Preliminaries, without semifinals,” “Preliminaries, with semifinals,” “Semifinals,” and “Finals” in “Round” in the leftmost column are “Preliminaries in tournaments without semi-finals”, “Preliminaries in tournaments with semi-finals”, “Semi-finals” It means “final”. 'All rounds' is the overall result, 'Blind Rounds' is the result of a blind audition that puts a screen between the performer and the judges and the gender is unknown. 'Not-Blind Rounds' is the performer's gender as usual. This is the result of a regular audition performed in such a way that The numbers written such as “-0.032” are numbers indicating “(% of women who won the round) − (% of men who won the round)”. If this number is a large positive value, many women have passed, if it is a large negative value, many men have passed. If it is close to zero, it means that there were almost the same number of men and women. Focusing on the results for each round, the value of Blind rounds is a negative value compared to the value of Not-Blind rounds. Rather , it is shown that the passing rate of men increased by blind audition . .

The original paper argues that the above result is an observational study , with the subject being 'an experiment in which the same person was judged by 'blind audition' and 'normal audition''. The results of that experiment are shown in Table 5 below. 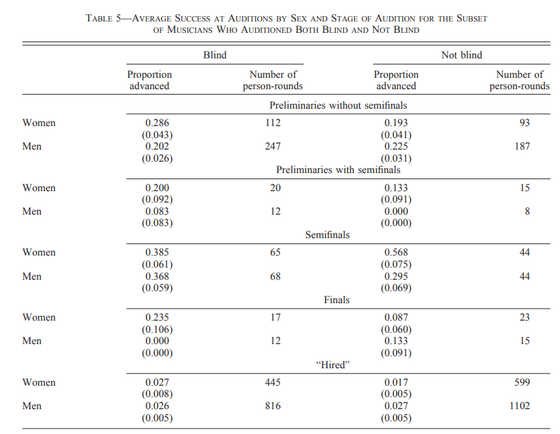 The left column has the words `` Woman '' and `` Men '', and the corresponding row shows the number of female passers, the percentage of male passers (Proportion advanced), and the number of participants (Number of person-rounds). The The results for each qualifying, semi-final, and final, such as “Preliminaries, without semifinals” are the same as before. “Hire” indicates the person who won the audition to the end.

However, Mr. Pallesen overruled that this table was useless and gave three reasons.

The papers are also compared to the control group using Regarding this comparison, Mr. Pallesen said, “There are large fluctuations in numerical values and standard errors, a high percentage of men who won the semi-finals by blind audition, and the P-value is not significant,” he said. There are no significant results. ' The authors also acknowledged in the paper that “the standard error is large and not statistically significant”.

This paper concludes with “In some experimental results, the data obtained was not significant. In addition, there were some results that showed the opposite fact,”・ There were auditions where the rate of women winning qualifying increased by 50% as a result of the test, and there were auditions where the rate of winning the final was several times higher. ” Pallesen points out that news agencies have overlooked this prelude.